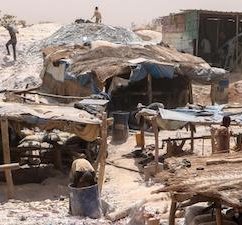 Solhan, Burkina Faso—In June 2021, somewhere between 170 and 200 people died in a massacre in Solhan, a desolate area in northern Burkina Faso wedged between the Sahara Desert and the African Savannah. The region is plagued by both severe climate issues and persistent violence. Image: In this CNN file photo taken in February 2020, miners work at a gold mine in Bouda, Burkina Faso. A growing number of small-scale gold miners are out of work in Burkina Faso as jihadists try to seize control of the country's most lucrative industry.

Many of the victims of the June massacre were artisanal miners who spent their days digging and panning for gold. This article by CNN details the massacre, which quickly faded from international headlines, if many people were even aware of it in the first place. Although it’s unclear who the killers were—various jihadist groups are active in the region—it is known that children as young as 12 were among the attackers, who burned the village down and stole what little gold the miners had.

Also unknown is what role gold might have played in the massacre, but it’s likely not a good one. Those who remember how the conflict diamonds issue unfolded in 1999 and 2000 will see eerie parallels in this situation, but this has the potential to blow up into a far bigger crisis for the industry. Conflict diamonds are solely a humanitarian issue; this, with ISIS, al Qaeda, and other jihadists involved, also has implications for U.S. national security.

From the CNN report:

Illicit gold has emerged as a key source of funding for jihadist groups, who have been seizing so-called "informal mines"—small-scale mining sites which rely largely on physical labor and basic technology to extract precious metals and minerals—in Burkina Faso, Mali and Niger since 2016, according to a Crisis Group report from 2019.

Bachir Ismael Ouédraogo, Burkina Faso's minister of energy and mines, told CNN the country lost 20 tons of gold through informal mining and exports every year, worth roughly $1 billion on the open market.

Ouédraogo describes it as a "war economy," a system that uses well-coordinated routes across the African continent. "The gold you end up buying is financing terrorism, and affecting our families here," he added.

Violence has spiraled out of control in Burkina Faso in recent years, and its military supported by EU forces and US dollars and training—is unable to stop it, says the report.

“The crisis in some of sub-Saharan Africa's poorest states presents an imminent threat to Europe's security, and by extension the United States, analysts say, in providing a secure and spacious breeding ground for terror networks. US officials have described the "wildfire of terrorism" in the Sahel, with al Qaeda and ISIS "on the march" in West Africa, aiming to "carve out a new caliphate."”

This isn’t the first time the spectre of conflict gold has been raised. In July 2020, Global Witness—the organization that brought conflict diamonds to light—released a report suggesting some of the world’s most popular consumer brands may be selling products containing conflict gold. In 2019, the New York Times produced a documentary showing how illegal gold mining has overtaken cocaine as Colombia’s most lucrative organized crime.

But Global Witness was talking about gold linked to armed groups in Darfur in 2012, not 200 dead miners in Burkina Faso that might be linked to the U.S.’s biggest external terror threat. And most people probably still assume drugs are the biggest problem in Colombia.

But even without jihadists in the mix, consumers increasingly do care, and care a lot, about the origins of the products they buy. While jewelry isn’t the only industry that uses gold, it is the most visible.

So if you think the news reports of Sierra Leonian children with their arms hacked off upset your customers, imagine how they might react to a headline suggesting their gold jewelry is helping to fund ISIS or al Qaeda.

For now, the best thing jewelers can do is educate themselves about everything the industry does to keep illicit gold out of the pipeline (see the World Gold Council website here), consider joining the Responsible Jewellery Council, and know their own suppliers. Don’t be shy about insisting your suppliers know their sources, too, all the way up the supply chain.