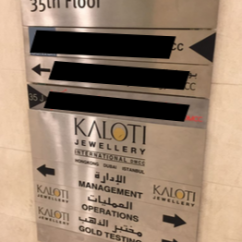 London, UK—A new investigation by the NGO Global Witness—the same organization that brought conflict diamonds into the world’s vocabulary—now reveals that products from some of the world’s most popular brands may contain conflict gold.

Global Witness’s report, released July 16, traces how the world’s largest gold refiner, Switzerland’s Valcambi, sourced significant quantities of gold from Kaloti, a United Arab Emirates-based refiner linked to conflict gold from Sudan. The report, titled Beneath the Shine: A Tale of Two Gold Refiners shows how Kaloti—established in 1988 as Kaloti Jewellery International—likely purchased Sudanese gold linked to armed groups in Darfur in 2012 and was at high risk of doing so in subsequent years. It says Kaloti’s gold could even be ending up in products from major brands like Amazon, Starbucks, Sony, Disney, and HP. (Image: The sign for Kaloti's offices in the DMCC, Dubai Multi Commodities Centre, courtesy Global Witness.)

The report acknowledges Kaloti’s gold isn’t proven to be conflict gold, but given the situation in Sudan, Global Witness maintains the likelihood is high. It says between 2012 and 2019 Kaloti has repeatedly acquired large amounts of gold from the Central Bank of Sudan, which bought gold from the Jebel Amer mines in Darfur, controlled by violent militias responsible for grave human rights abuses during the long-running civil conflict in the region.

While the report doesn’t specifically mention any of the questionable gold ending up in the global jewelry supply chain, the potential connection could easily plant seeds of doubt in consumers’ minds.

From the report: "By sourcing gold from the Central Bank of Sudan, Kaloti dealt with a supplier which it must have known dealt with conflict gold. The UN Panel of Expert on Sudan report from 2016 made it unequivocally clear that the Central Bank of Sudan sourced conflict gold122 but even before that, media had already reported that the Central Bank sourced from Jebel Amir where heavy fighting over the access to a mine took place in 2013.123 It seems that Kaloti has ignored such reports and continued sourcing gold from the Central Bank of Sudan, thereby contravening the OECD Guidance, particularly its Annex II, which calls on companies to “immediately suspend or discontinue engagement with upstream suppliers where [they] identify a reasonable risk that they are sourcing from, or linked to, any party providing direct or indirect support to non-state armed groups."

Despite Kaloti’s reputation, the company’s gold could be ending up in products all over the world, in part through relationships with reputable refiners and traders like Valcambi. Global Witness research showed that in 2018 alone, over 270 international companies likely sourced gold from Kaloti or purchased products containing gold refined by Kaloti. Among them are well-known brands such as Amazon, Starbucks, Sony, Disney, and HP.

“Our explosive findings on the huge global reach of Kaloti’s gold and the company’s relationship with Valcambi starkly illustrate the systemic weaknesses of the gold trade, allowing gold from suppliers with questionable sourcing practices to enter supposedly reputable international supply chains,” said Joshi.

During the period that Kaloti was sourcing from the Central Bank of Sudan, one of the Bank’s suppliers was a company linked to the Rapid Support Forces, a powerful paramilitary group reportedly involved in the massacre of over 100 pro-democracy demonstrators in Khartoum in June 2019. That same year the Central Bank probably bought gold from mines occupied by another armed group, the Sudan Liberation Army/Abdul Wahid, which has engaged in killings, kidnapping, torture, extortion and forced labor.

Swiss refiner Valcambi appears to have ignored obvious warning signs that Kaloti could be sourcing conflict gold and continued to buy gold from the company, says the Global Witness report, citing sources who indicated that in 2018 and 2019 Valcambi sourced around 20 tons of gold directly from Kaloti, and over 60 tons from a company linked to Kaloti. Valcambi’s business relationship with Kaloti dates to 2002 and appears to be ongoing.

“Valcambi presents itself as an industry pioneer in responsible sourcing and claims to go above and beyond the internationally recognized OECD due diligence standards, yet it is contravening those very standards by failing to scrutinize Kaloti’s irresponsible sourcing practices and continuing to source gold from the problematic refiner,” commented Joshi. 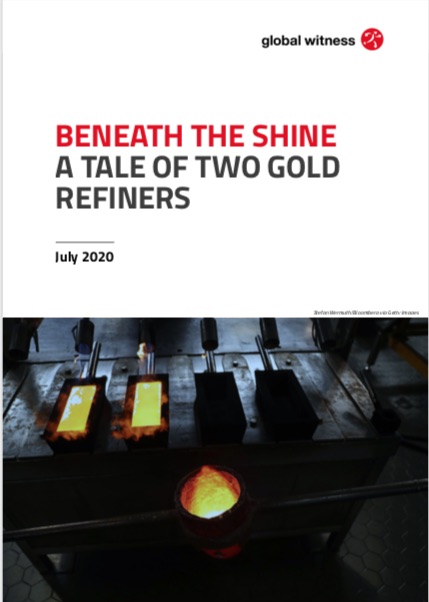 Global Witness also is taking the gold sector’s biggest watchdog to task. In a press statement, the organization said its findings severely undermine the credibility of the London Bullion Market Association (LBMA), the gold sector’s premier accreditation body, which has continued to include Valcambi on its Good Delivery List.

“Any company on this list is supposedly required to carry out robust supply chain due diligence, which Valcambi has failed to do with Kaloti. The gaps in the LBMA’s responsible sourcing standards and the body’s apparent lack of oversight of Valcambi has facilitated the company’s due diligence failures vis-à-vis Kaloti. Valcambi’s auditor KPMG also appears to have turned a blind eye to Valcambi’s sourcing from a high-risk supplier,” says Global Witness.

“These failings by auditors are particularly worrying because of the central role audits are supposed to play as part of industry schemes on responsible sourcing,” said Seema Joshi. “In the case of both Valcambi and Kaloti, it is clear that the gold industry’s inadequate attempts at self-policing haven’t worked.”

Global Witness says governments cannot rely on the gold sector’s self-regulation and must adopt and enforce strong laws on supply chain due diligence, citing lax oversight in both the UAE and Switzerland.

“Our report exposes how both Valcambi and Kaloti’s problematic sourcing practices have been enabled or ignored by gold industry bodies, some of the world’s biggest accountancy firms, and Swiss and Dubai authorities,” said Joshi. “It’s high time that the major stakeholders in the gold sector move beyond rhetoric and PR to real action to ensure that gold does not continue to fuel and fund conflict and human rights abuses,” she concluded.

Global Witness is calling on both the UAE and Swiss authorities to adopt and enforce stringent legislation on supply chain due diligence and on accreditation bodies such as the DMCC and LBMA to ensure that refiners properly adhere to due diligence standards; that audits are carried out in a meaningful way; and that adequate sanctions are imposed on refiners that breach their standards. It also called on Valcambi and other refiners to ensure, in line with the OECD Guidance, that they have effective due diligence systems and that they do not source conflict gold nor source from companies that could be accepting conflict gold.