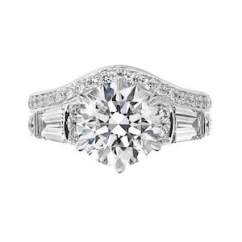 London, UK—Britain's Princess Beatrice, who recently married Italian real estate magnate Edoardo Mapelli Mozzi in a private ceremony after their planned nuptials were derailed by the coronavirus pandemic, broke tradition in yet another way: instead of the yellow Welsh gold wedding band associated with the royals, hers is a platinum and diamond wrap-around band that will complement her platinum-and-diamond Deco- and Victorian-inspired engagement ring. Both were created by British jewelry designer Shaun Leane. Mozzi’s ring is a vintage gold band designed by Josh Collins.

The couple, who reportedly had fewer than 20 guests at their socially-distanced wedding and substituted poetry readings in place of singing (banned after multiple cases of COVID-19 were traced to choirs) held onto tradition in other ways. The bride wore a vintage Norman Hartnell gown belonging to her grandmother, Queen Elizabeth II, and the Queen also lent her the Queen Mary Diamond Fringe Tiara that she herself wore for her own wedding to Prince Philip in 1947.

The Queen typically lends royal brides a tiara to wear for their weddings, but only Princess Anne, the Queen’s only daughter, has worn this one since her mother’s wedding. Kate Middleton wore the Cartier Halo Tiara (also called the Cartier Scroll tiara) for her marriage to Prince William. Meghan Markle wore the Queen Mary Diamond Bandeau tiara to marry Prince Harry, and Princess Eugenie (Beatrice’s younger sister) wore the Greville Kokoshnik tiara by Boucheron, the only recent royal bride to choose one that has emeralds as well as diamonds. 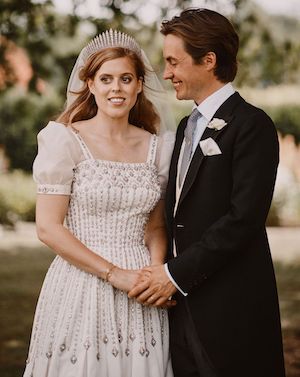 Princess Diana, meanwhile, had no need to borrow a tiara from the Queen. Her aristocratic family has a substantial tiara of its own, so naturally, she wore the Spencer tiara for her 1981 marriage to Prince Charles. She did, however, did wear the royal Lover’s Knot tiara for other formal occasions. That one was created for Queen Mary who later passed it down to her granddaughter, Queen Elizabeth II. (This was Mary of Teck, wife of King George V—not to be confused with Mary, Queen of Scots, who lost her head at the hands of her cousin Elizabeth I.) 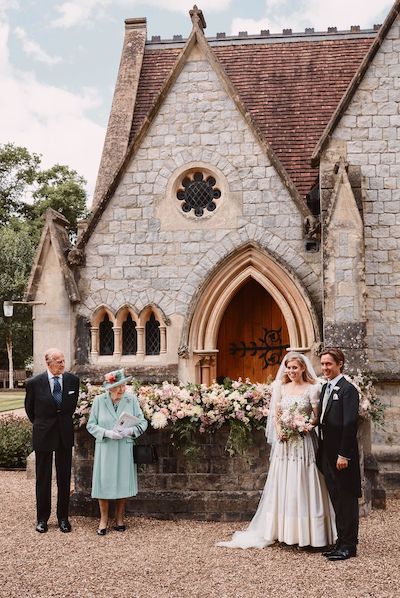 Platinum and diamond wrap bands similar to Princess Beatrice’s are available from a multitude of jewelry brands, including Fana, Uneek, Tacori, David Yurman, and many more. Here are a few:

Fana's version is available in platinum or white, yellow, or rose gold. 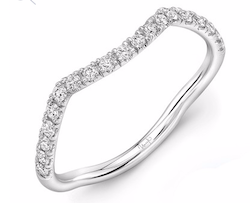 Here's a platinum one from Tacori.

David Yurman's platinum version features his signature cabling on the inside.