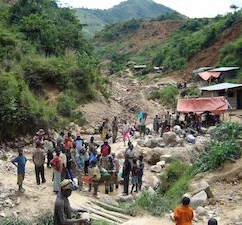 Rwanda—A report from the United Nations and a legal case have uncovered a sophisticated smuggling network funneling two strategically important minerals—gold and coltan—from conflict zones in the Democratic Republic of the Congo (DRC) through Rwanda and straight into the global supply chain, where they end up in consumer goods like cellphones, computers, and jewelry. (Image: Artisanal gold miners in Kamituga, DRC; credit Sara Geenen, University of Antwerp, via Mining.com).

A report in the Globe and Mail says the smuggling is also fueling military and human rights abuses in Central Africa and is damaging corporate-supported efforts to clean up the minerals trade, as well as jeopardizing efforts to ensure socially-responsible consumers can avoid purchasing products containing these “blood minerals.” From the article:

“The latest report by the UN Group of Experts on the DRC, submitted to the UN Security Council in June, describes how gold and coltan are smuggled across the border from the DRC to Rwanda, where taxes are much lower. The coltan is often concealed in canoes and other boats on Lake Kivu, which straddles the border between the two countries, or hidden in secret compartments in trucks.”

At the very least, miner safety is enough to make socially-conscious consumers think twice. A September 2020 gold mine collapse in eastern DRC (eastern DRC is the conflict area as well), killed at least 50 miners.

Gold already has been at issue in South America, where a 2019 documentary showed it overtook cocaine as Colombia’s top criminal export, something United Nations research backs up. And a 2020 report from Global Witness traces how the world’s largest gold refiner, Switzerland’s Valcambi, sourced significant quantities of gold from Kaloti, a United Arab Emirates-based refiner linked to conflict gold from Sudan. The report, titled Beneath the Shine: A Tale of Two Gold Refiners shows how Kaloti likely purchased Sudanese gold linked to armed groups in Darfur in 2012 and possibly beyond, and that that gold could end up in products from major brands like Amazon, Starbucks, Sony, Disney, and HP.

Rwanda, meanwhile, lists mining as one of the key industries in its GDP, but experts say the country’s figures reflect what’s being exported, not what’s being produced, and believe more than half of the minerals exported from Rwanda are actually mined in conflict areas of the DRC, smuggled in, then re-exported.