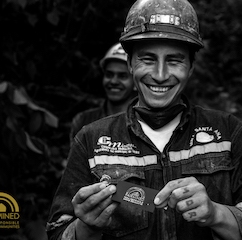 Austin, TX—A new consumer study shows that while current awareness of the gold supply chain is minimal, consumers do care about the working conditions for miners and would pay more for jewelry that’s guaranteed to contain responsibly mined gold. Image: Consumers will pay more for responsibly sourced gold with good working conditions for miners. Courtesy Alliance For Responsible Mining:

While gold mining has come under fire before—mainly for environmental reasons, such as the endangerment of salmon in Alaska’s Pebble Mine area—it never achieved the same levels of awareness or consumer pushback that conflict diamonds did in the early 2000s. But last year two TV exposés about artisanal gold mining in Colombia revealed disturbing ties to masters of the cocaine underworld, along with human rights abuses, environmental destruction and, finally, some American refiners’ complicity. (Read more about those reports here and here). Later, a report from Global Witness found many products, not just jewelry, contain conflict gold.

MVI Marketing LLC (THE MVEye) and Christina T. Miller Sustainable Jewelry Consulting (CMC) on Wednesday announced the completion of a joint benchmark consumer market research study about awareness of responsibly sourced gold. The study showed limited consumer awareness of the origin of the gold in jewelry and the working conditions facing small-scale gold miners. But when informed about the gold supply chain in jewelry and the working conditions affecting artisanal gold miners, a significant portion of respondents said they would pay more for certified responsibly-mined gold jewelry. 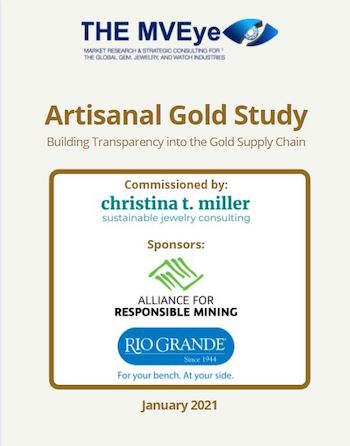 Upon completion of the report, Christina Miller, an expert in the field of gold supply for jewelry manufacturing, said, “This research study is a benchmark from which we will measure our progress as an industry. The current conditions for artisanal and small-scale gold miners are neither healthy nor sustainable and this research shows that as consumers learn more, they will demand both transparent sourcing and improved conditions for the people doing the mining.” 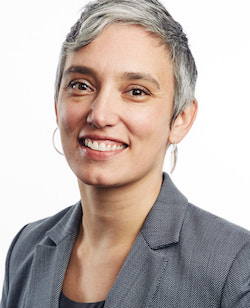 Marty Hurwitz, CEO of MVI Marketing LLC (THE MVEye) added, “Transparency in the supply chain for all consumer goods is an evolving necessity as the next generation of consumers becomes the dominant spending demographic globally.”

Key findings revealed in the report include:

These findings show there is great opportunity for the jewelry industry to increase transparency in the gold supply chain. A deeper dive into the specific results showed that knowing the origin of their gold is important to more than half (51%) of respondents. While only 20% do base their purchase decision on the knowledge, 31% say they’d like to know and it may impact their purchase decision. 21% said they do not consider it, and of those, perhaps unexpectedly, 26% were women and 9% were men.

One of the expected findings in the study was that artisanal mining is not well understood by respondents. Less than 20% were aware of the term at all, and of this group, only one-third correctly described artisanal gold as gold from individual or small-scale miners. 24% said it was gold mined by hand in impoverished areas (correct in some circumstances), but almost as many (23%) said it was gold jewelry made by an artist. 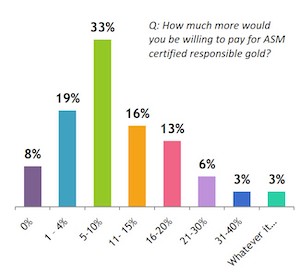 But while responsibly sourced gold is an enticement, lack of it is not a deal-breaker. Once challenged, 44% of respondents admitted that if they found jewelry they liked that was not ASM Certified Responsible Gold, they would still buy it.

Gender was an interesting factor in the research findings. Men were more likely to read details about the products and expressed more interest in the origin and environmental topics than women. Age seems to play a minor factor in consumers' receptiveness to ASM Certified Responsible Gold, though younger consumers do consider origin, environmental, and certification issues more than older ones. Almost 50% of younger respondents (ages 25-35) would choose ASM Certified Responsible Gold, while 42% of those ages 36-50 would make the same choice.

Respondents were asked to identify the issues that face large conglomerates as well as artisanal and small-scale miners. Over 60% of respondents understood dangerous working conditions as a top issue for both groups. Human rights abuses and local poverty around the mine site were also seen as important issues for artisanal and small- scale miners.

Diamonds set in gold is cited as the type of fine jewelry most purchased in the past three years (55%), followed by diamonds in sterling silver. All-gold jewelry (karat gold jewelry with no diamonds or gemstones) was the favorite of 50% of the men.

The research study was conducted in November 2020 and completed by 1,015 respondents ages 25-50 in the United States, who purchased jewelry valued at $200 or more in the past three years. It was co-sponsored by the Alliance for Responsible Mining (ARM) and Rio Grande.