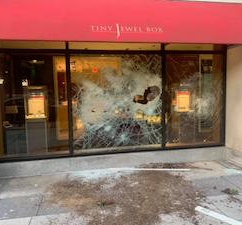 New York, NY—During a special virtual presentation January 6, Jewelers Security Alliance president John Kennedy presented the organization’s annual state of crime in the industry address for 2020. JSA’s two-part mission includes both informing jewelers about crime and tips to prevent it, and working with police and the FBI to solve crimes, particularly those that are part of a pattern.

Typically, there are about 1400 crimes against the industry a year, said Kennedy. A huge number of those are followed up with phone calls and emails to get information, and then JSA can connect the dots. For example, putting a police officer in Nebraska in touch with one in Illinois when stores in both locations are hit, and looking for patterns to see if it’s the same gang.

“When you have a burglary in a small town and the officer has never dealt with a safe burglary before, we can spend time with them and show them what to do and what to look for,” he explained.

2019 was very bad year for crime, said Kennedy. Both dollar-value losses and burglary losses were up tremendously from the year before.

“Coming into 2020, we were fearful it would be another bad year,” he said. Obviously, however, it became an outlier because of the pandemic, and the usual types of crime are down considerably. But every adversity also presents opportunity, and it’s no different for criminals.

“There are a number of reasons usual crime is down,” said Kennedy. Most obviously, stores were closed for weeks, which meant that traffic was down. But also fencing opportunities for stolen goods were curtailed, and travel and mobility were limited, which meant that Gypsy gangs can’t engage in foreign travel. As a result, in a number of categories, crime was down significantly 2020. But two things were up sharply: burglaries, and damage from the George Floyd riots in June. Top image: Tiny Jewel Box in Washington, DC sustained damage during the riots.

400 jewelry stores were looted in June, said Kennedy. “Not so much merchandise was taken but there was a tremendous amount of property damage, closing stores for days and weeks. That was atypical crime, but it caused huge damage in 2020.”

Burglaries also spiked this year, and those are big dollar numbers—sometimes well into the millions if it’s a large safe burglary. Gangs from Chile have been particularly active in burglaries.

A surprising number of jewelers also don’t respond to their alarms, said Kennedy, and says jewelers must respond—but make sure they do so with law enforcement.

Another increase is coming from desperate amateurs doing grab-and-run thefts. They come into a store, look at the item, pocket it, and run. There are hundreds and hundreds of those every year, and sometimes they get a valuable watch or jewelry item.

Plus, said Kennedy, the masks necessary to prevent the spread of COVID-19 are emboldening criminals to be more concealed.

Crimes against traveling salespeople continue, especially in South Florida, though those were understandably down somewhat this year. Kennedy pointed out that while these get a lot of attention in the press, the dollar losses are actually much lower than burglaries and robberies. Finally, there’s been an increase in cyber crime, especially credit-card fraud. “Popular press plays this up tremendously, and it is an important issue, but dollar losses are still not anything like burglaries and robberies,” said Kennedy, and recommended jewelers follow appropriate protections around online and card-not-present transactions.

For 2020, while Kennedy says he’s not looking into a crystal ball, the next few months at least will still have somewhat limited retail activity. Beyond that, it’s hard to predict what will happen when vaccines are widespread and things finally start to get back to normal.

He concluded the presentation with a special thanks to Jewelers Mutual Insurance Co., without which, he said, JSA could not do what it does and the industry would be a far more dangerous place.