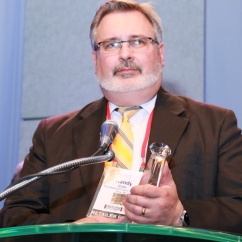 Troy, MI—Jeweler Randy Cole (left), owner of the Diamond Vault of Troy, is getting a new kind of career education he didn’t sign up for: fighting fraud.

Because Cole holds a pawn license, he often writes checks to consumers, which is where his trouble began. Although his issues have nothing to do with the current COVID-19 situation, he warns that thieves are going to take advantage of increased online business and people’s attention being diverted elsewhere.

“We buy and sell gold coins and estate and everything else. Even though we’re in the jewelry business we’re still under the pawn act, so we’re allowed to remain open. If people have to sell gold, we let them come in by appointment and do great distancing. Our setup more like a home than a store,” he says.

Once the thieves have your check in hand, they also have your bank account number, your bank routing number, and your signature, warns Cole. From there, it all goes up for sale on the dark web—which means that not only do the original thieves have it but also lots of other thieves can access it, especially in the era of mobile capture deposits, which are even more popular since the COVID-19 pandemic.

Since the federal Check-21 law went into effect in 2004, anywhere from a fraction to the full amount of money a check is written for is available immediately to the depositor. But making the funds available to the depositor doesn’t mean the check has cleared. If it is later proven fraudulent, the bank will reclaim the funds. That “law of unintended consequences” was a great gift to fraudsters.

Cole pounced immediately on a mobile deposit made in Minnesota using a fraudulent check bearing his real signature and account information. Most people will notify their bank or even their local police when such a fraud occurs, but Cole did something many victims don’t think to do: he called the bank where the check was deposited and let them know one of their customers is a fraudster. That bank then got its local police involved, who called Cole from Minnesota.

“Had I done it from here, the police never would have called Minnesota,” he says. “The bank would have reclaimed its money and you’re out.” (Editor’s note: different financial institutions have different policies regarding fraud reimbursement. Some will reimburse customers for part or all of a fraudulent transaction. Check with your individual financial institution to learn its rules and its recommendations for dealing with fraud.)

The key is vigilance, stresses Cole. You need to monitor all your accounts every single day, he says. If you can’t get into your store like he can, monitor it from your home computer, but don’t let your vigilance slip even for a day.

“Just because you’re not in your store doesn’t mean you don’t watch your store!” he warns fellow jewelers. “You have to be very astute today. Criminals are genius! You have to be diligent and have a tenacity to defeat them.”

In addition to stealing check information, watch out for ACH transactions and electronic credit card payments, advises Cole. If you have automatic payments set up for a credit card, the bank doesn’t necessarily always check to see if it’s the same credit-card number; its computers might only see that it’s a credit card from the same issuer (such as Capital One, American Express, Chase, etc.) that you’ve set up a payment for.

Cole almost lost $5,000 that way, but he called the credit card company right away and it was reversed within hours. Had he waited a week to check his account, it might not have been refunded, he says. And then legitimate payments he set up—such as to vendors—would have bounced, harming his reputation in the industry.

Now he’s waiting on another fraudulent charge, for $26.

“I will fight for $26 because I want that person to know that they can’t get it from us. They may get it elsewhere, but it won’t come from us. We’re calling where it’s going to and letting them know it’s fraud.”

Cole says he’s not looking for the thief’s name, or to press charges, just to let the receiving bank know it’s fraud.

Experts agree that stopping small fraud is a crucial step in stopping major fraud. Frank Abegnale, a former con artist turned security consultant and author of Catch Me If You Can,does frequent seminars on behalf of AARP. One of the first things he warns audiences is that thieves will often start small just to see if you’re paying attention to your statements. Too many people don’t, he says: they just glance at the total and if it seems about right, they pay without reviewing each individual charge. Or they’ve set up an automatic payment every month and don’t even look at their statements at all.

If a small innocuous amount such as movie tickets or takeout food goes unnoticed, thieves will swoop in for the big charge, and by then it could be too late.

AARP’s Fraud Watch Network is free to join and offers many valuable tips. They also have a robust amount of fraud-protection information on their website, such as this page and updated warnings of new frauds being perpetrated.

Next article:
Survey: Most Better Jewelers Remain Confident Despite Pandemic