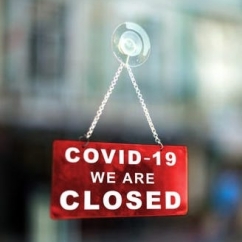 Merrick, NY—By and large, upscale jewelers remain cautiously optimistic about the post-pandemic future. A survey conducted April 6-8 by The Centurion Newsletter asked jewelers about a variety of topics, including business, layoffs, and their own financial health. Left: A common sign around the nation. Image, Getty.

Obviously, business has fallen off a proverbial cliff: 99% of Centurion respondents said their business is either non-existent—or if they’re doing any business it’s dramatically less than it would have been otherwise.

Slightly over 84% of respondents report their physical stores are currently closed, and the majority don’t anticipate being able to open until the end of April or early May. Some, however, are fully expecting to have to remain closed into June or even July.

But despite the restrictions, there is good news: better retail jewelers seem to be in strong financial shape overall. While jewelers are understandably concerned, most feel confident about both their own personal financial wellbeing and about business coming back after the crisis passes. And even in a crisis of this magnitude, outliers do exist: one respondent says they’re doing dramatically more business since this began.

Confidence. 61% of respondents are confident that business will rebound when the pandemic is over. The difference is in how soon they believe it will happen: 12% are “very” confident and expect an immediate rebound as soon as restrictions are lifted. But the majority (49%) are more reserved: they’re “somewhat” confident that business will pick up, but they don’t expect the rebound to happen right away—at least not for jewelers.

“There’ll be pent-up demand, but not quite sure [it’ll be] for jewelry. Business will rebound, but when?” asks one mid-Atlantic region jeweler.

Still, it should be noted that over one fourth (28%) of respondents are not feeling much confidence at all. 23% of those believe it’s going to be at least a year or longer before business rebounds, and 5% say people are underestimating the damage to the economy and are worried that the road back will be much more difficult than anticipated.

How Confident Are You That Business Will Rebound Quickly After The Pandemic? 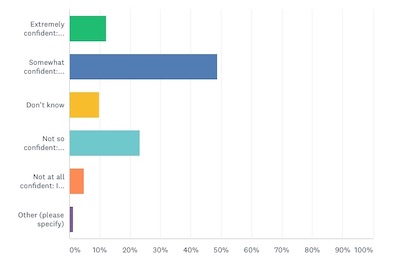 In terms of their own financial position, the news is good. An overwhelming majority of respondents—over 92%—are comfortable that they and their businesses will survive. Indeed, one third report their financial reserves are excellent and they’re comfortably well-positioned to survive even a prolonged pandemic situation.

60% say they’re in good shape with enough financial reserves to weather a short-term crisis, but warn that a prolonged crisis will start impacting their business’s financial health.

7% of respondents, however, are very worried their businesses won’t survive or they’re waiting to see if the federal programs like PPP and CARES Act loans can help ensure their survival.

How Confident Are You That Your Own Business Will Survive This Crisis? 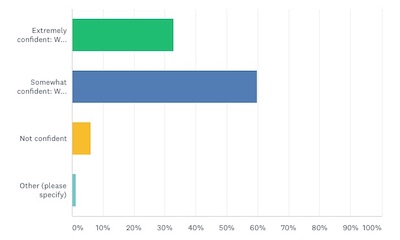 Staff and retirement. As the nation’s unemployment numbers skyrocket, jewelers are doing their best to hang onto valued employees.

Slightly more than half (51%) of respondents say they’re currently paying their employees a full salary and benefits even with their stores closed. The majority say they’ll do it as long as possible but acknowledge they’ll have to reassess in the event of prolonged closure—and one indicated layoffs will begin next week. Some are paying reduced salaries, or health insurance but no salaries, and some are waiting for the federal PPP loans to pay their staffs.

And luckily for the employees of 16% of our respondents, they plan to keep paying their staffs’ full salaries and benefits indefinitely. In the words of one Arizona jeweler, “We’ll keep our team together!”

Over 30% have placed staff on furlough with the hope of rehiring them when the crisis is over or have cut some staff and retained others. Only a few have laid off staff with no expectations to rehire.

Finally, given the age of many independent jewelers, the crisis has sparked questions about whether some will just hang up their loupes and call it a day. We asked, “If you were starting to think about retirement, will this crisis change your plans?”

In total, 70% of respondents said no, the COVID-19 crisis won’t push them into retirement. For most, retirement hasn’t even crossed their mind, but 25% said they had been thinking about it and those plans have now changed. For most of those, it’s financial: the stock market crash impacted their investments enough that they now need to delay retirement for a few years or, in the case of a few, are afraid they may not be able to retire at all.

“I’m actually afraid to look at our accounts. I’d rather not have a heart attack in the middle of all this,” quipped one.

A few respondents who had been planning to retire soon have changed their minds because being confined to home made them realize they’re not ready to give up working.

But about 11% said they’re now more eager than ever to retire and about 9% either haven’t made up their minds or they plan to look at alternative methods of working that are still active but less intense.

Next week: how and what jewelers are selling through the crisis.

Next article:
Passover And Easter Wishes From Centurion