Gaborone, Botswana—Things are not getting easier in the diamond world. De Beers’ rough diamond sales declined more than 50% in the sixth sales cycle of 2019. Sales for the cycle were provisionally estimated at $250 million, a more than 50% drop year on year compared to 2018 ($533 million) and a 36% drop from the $391 million sold during the fifth cycle of 2019.

“With ongoing macroeconomic uncertainty, retailers managing inventory levels, and polished diamond inventories in the midstream continuing to be higher than normal, De Beers Group provided customers with additional flexibility to defer some of their rough diamond allocations to later in the year. As a result, we saw a reduction in sales during the sixth cycle of 2019.”

In U.S. retail jewelry stores, the decline in diamond sales is noticeable. Figures from The Edge Retail Academy, which aggregates sales data from more than 1,000 U.S. retail stores, shows gross sales of diamond bridal jewelry, other diamond rings, and loose diamonds were down 6% year on year as of May 31. Sales of diamond fashion product also declined, but less so: 3.9% year on year. Unit sales in both categories declined; 5% and 8% respectively. The one spot of better news is that the average retail ticket edged up slightly in the fashion category, from $1,219 to $1,266—but the average ticket for bridal jewelry dropped by $15, from $1,795 to $1,780.

Meanwhile, the Israel Diamond Exchange, in cooperation with the World Federation of Diamond Bourses, is joining the effort to promote natural mined diamonds over lab-grown. IDE this week released a second video aimed at promoting natural diamonds over synthetics or simulants. The digital campaign launched at the end of June with the first video titled “Fake Times, Real Diamonds.”

The first video focused on all the “fake” things of current times: fake news, fake beauty, fake food, and so on, before showing “real” diamonds and ending with the tagline I (heart) natural diamonds, with a heart-shaped diamond. It was viewed 1.2 million times and received 323,000 likes or shares on social media. Likewise, IDE will distribute the second video through all social media channels and it will also be distributed by the 29 WFDB member diamond exchanges around the world through local social media.

Click here or on the image below to watch the first video: 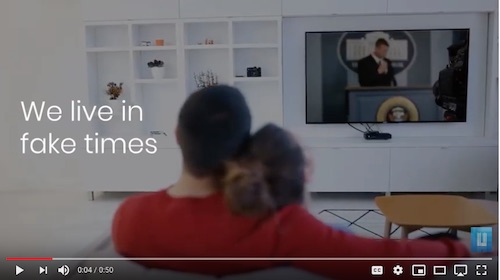 The new video shows how life has improved through technology—travel, communication, online shopping—but that some things never change, i.e. the value of true love and the value of “True Diamonds.” It ends with the same “I (heart) natural diamonds” tagline with the heart-shaped diamond. Both videos end with the IDE and WFDB logos.

Click here or on the image below to watch the latest video: 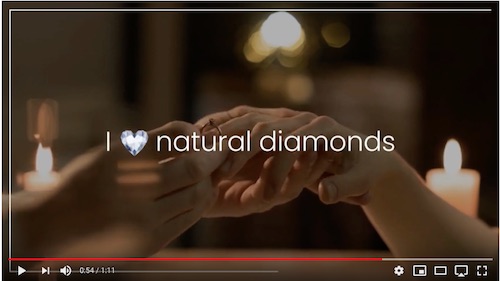 But is the IDE/WFDB campaign at odds with other industry efforts to boost natural diamond sales? Although an international effort, much of its imagery is American—where the FTC last year ruled that synthetic diamonds are still considered “real.” The campaign’s “I (heart) natural diamonds” tagline equates the concept of “real” diamonds with mined diamonds—but without explicitly saying so.

The second IDE/WFDB video visually equates true love with traditional engagement ring imagery, something both De Beers and the Diamond Producers Association are backing off to embrace a wider concept of love and commitment as the American bridal market shrinks.