New York, NY—In more troubling news for the bridal jewelry category, a new survey conducted by TD Ameritrade finds that younger Americans think even $2,500 is too much to spend on an engagement ring. (By contrast, The Knot’s 2018 Real Wedding Study showed the average engagement ring in the United States costs $5,680.)

The Young Americans & Marriage Survey, conducted by the Harris Poll on behalf of TD Ameritrade, surveyed 3,054 U.S. adults and teens age 15 or older in March 2019. It found that among younger Americans (younger Millennials age 22-28 and Gen-Z, which it defines as age 15-21) marriage is still important, although 25% are opting out of marriage altogether.

More Gen-Z (58%, vs. 50% of young Millennials) say they plan to get married. But that could be a function of age and life stage, as more of the Millennial group of respondents (19% vs. 3% of Gen-Z) already are married. But slightly more Gen-Z (24%) than younger Millennials (22%) say they don’t plan to marry. 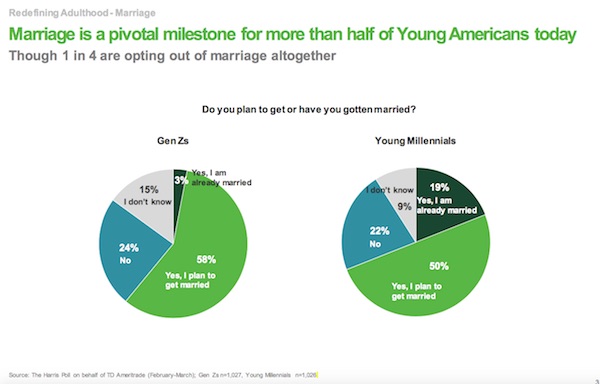 All charts: Harris Poll on behalf of TD Ameritrade

But having an expensive engagement ring is not a priority for either group, says the study. By an overwhelming majority, both young Millennials and Gen-Z believe an engagement ring should cost no more than $2,500—and the larger majority in both groups were seeking rings that cost less than $1,000. The study did not specify diamond rings; just engagement rings.

In total, 82% of Gen Z and 69% of young Millennials don’t want to spend more than $2500 on the engagement ring. An older group of respondents, dubbed “parents,” were more receptive to a costlier ring: only 57% of the parent group said the ring should cost less than $2,500. 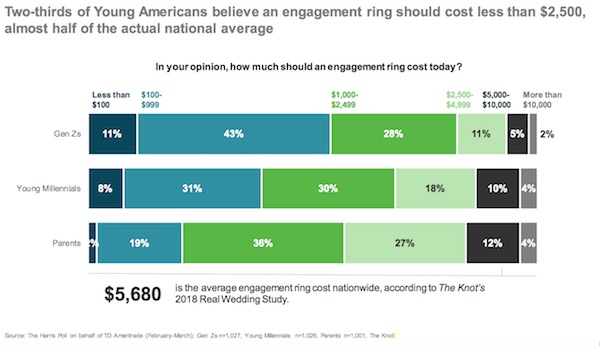 A startling number of young Americans age 15-28 think an engagement ring shouldn't cost more than $2,500. The study, conducted by the Harris Poll on behalf of TD Ameritrade bank, did not specify diamond engagement rings or any other gemstone, just "engagement ring" as a category.

Young women are more likely than young men to put the brakes on price while ring shopping, though as they grow older, that gap starts to close: 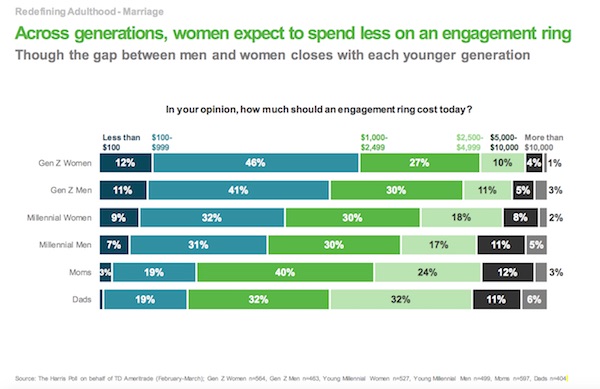 Other findings from the survey show that married young Americans either already are or expect to be ready to move into other major financial milestones, such as saving for retirement or buying a home or car, at an earlier age than single young Americans.

Meanwhile, as DeBeers hopes to convince a new generation why A Diamond Is Forever, Proctor & Gamble quite literally put its own spin on it with a new “forever roll” from its Charmin brand of toilet tissue. The giant roll, which at 850 sheets is touted as being a month’s supply, comes with its own “starter kit” and is designed to fit into narrow spaces, says a report on CNBC. For now, it’s only available online—including a subscription service!—and is being targeted to Millennials who are living in cramped rental spaces, are environmentally concerned about excess packaging, or don’t have time to buy or closet space to store a stash of regular size TP rolls. 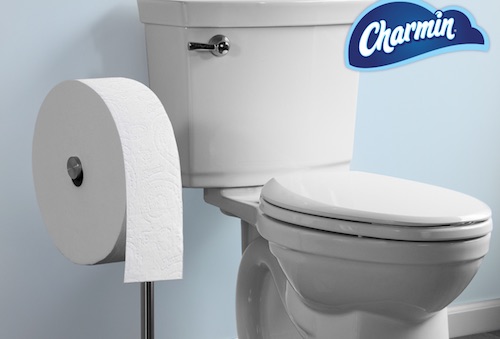 Obviously that roll is a lot bigger than a $2500 engagement ring would be, too.