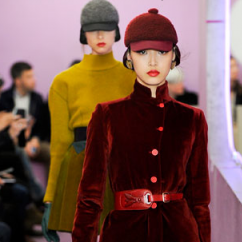 Merrick, NY—If big and retro marked the top trends from the New York runways last month, then even more new shapes and shine round out the story from the catwalks of London, Paris, and Milan.

Gold is huge news. Models were swathed head-to-toe in shimmering lame, sequins, pailettes, and more. We saw the look here at Michael Kors, Prabal Gurung, and Elie Saab, but it was also a hit overseas, with the likes of Paco Rabanne and Giambatista Valli also applying the proverbial Midas touch.

Even if it isn’t gold, shine is important this fall, as evidenced by waxed and laminated fabrics and patent leathers in a host of colors, as well as black. Catwoman would feel right at home with some of these outfits like this Jil Sander dress, below. 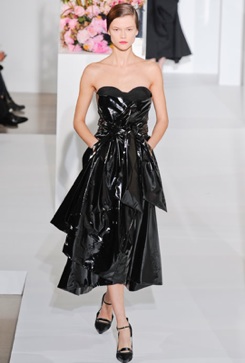 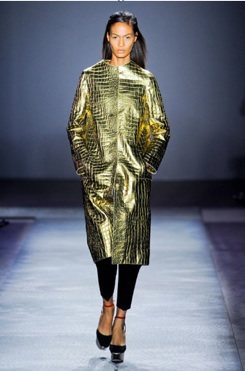 For both of these trends, jewelry will need real heft and presence to hold its own among the glitter. Gold, of course, looks best with gold, but colored gems will make it really stand out. With shiny fabrics, keep adornment simple but bold: a cuff or substantive cocktail ring will suffice, but necklaces and even big earrings may overpower. This is the moment for the diamond stud earring—and it’s one category where there’s no such thing as “too big.”

While we’re discussing jewelry, let’s “brooch” another subject: for the first time in a long time, we’re seeing pins prominently on the runway. Will it translate to retail? 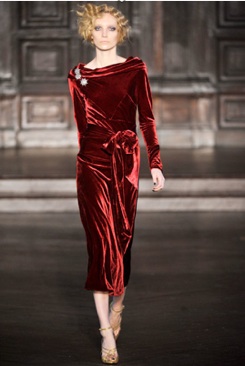 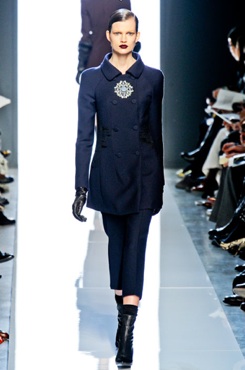 L'Wren Scott, left, and Bottega Veneta, right, both showed brooches on the runway.

Patterns play a strong role for fall, especially at the European shows. We saw embellishments in New York but in Europe there were lots of grids and lattices reminiscent of a Tuscan gate, as well as rich ornate brocades worthy of Shakespeare himself. 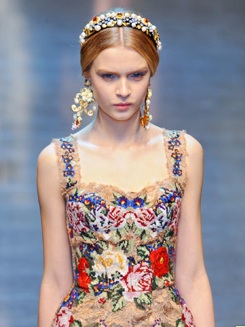 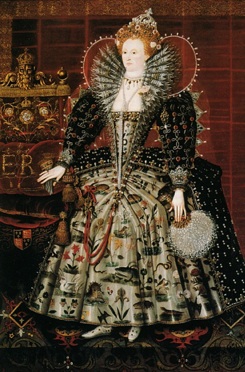 It’s tough to add more ornamentation to an already-ornate outfit, unless it is a continuation of the look like we see at left from Dolce & Gabbana, or you take your inspiration right from the Bard and add jewelry inspired by what Elizabeth I might have worn (FYI, she was a great lover of pearls).  Below, a pair of champagne and white diamond earrings by KC Designs works the brocade-inspired trend into jewelry. 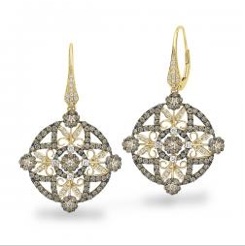 As in New York, military influences were important in Europe as well. And, as previously noted, this is officers in full dress uniform, not G.I. cammo, and the best jewelry to wear with it is going to echo the formal sensibility, like the return of a button earring, an oversized watch, or even a pin mimicking an officer’s medallion. The photo at the top of the page shows a velvet pantsuit from Kenzo accented with big button earrings.

After years of being quietly relegated to the back of the closet while women opted for easy dresses and louche cardigans, the pantsuit is back. At Prada, it made a strong statement in orange, bedecked with brooches. Gotta love that Miuccia Prada—her jolie laide (pretty/ugly) ideas may seem a little odd at first but somehow they usually make it to mainstream. Maybe filtered down, but still the influence is there. From this look, let’s assume the high waist, slightly flared ‘60s shape will be influential. Somehow, Prada manages to pile heaps of brooches onto a suit that’s already got strong buttons and a belt, and still look chic. 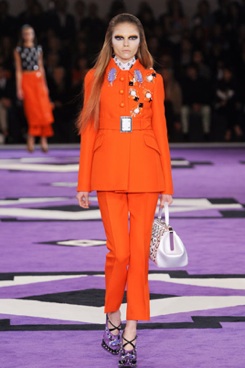 The Centurion guesses it’s not likely a full orange pantsuit will make it beyond the most dedicated fashionistas, but we’re hoping this scattering of pins—and the big brooches seen at Bottega Veneta and L’Wren Scott, above—might spawn some interest in the category. Vintage is a good bet here: the trend for vintage is very strong this year in both clothing and jewelry, especially Deco-era looks, which also was a very good period for pins. Jewelry at the recent Baselworld fair was ripe with Deco influences, as well as even earlier Art Nouveau touches. 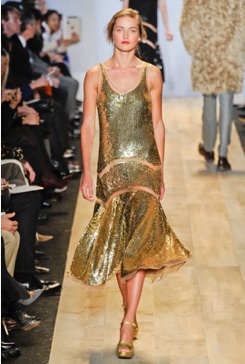 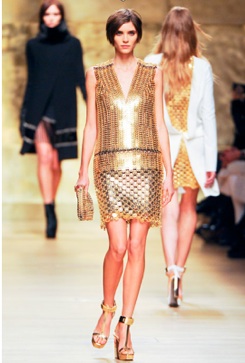 Two trends in one: both shiny gold and '20s flappers influenced Michael Kors, left, in the USA, and Paco Rabanne, right, in Paris. Below, a single bold gold cuff such as this one by H. Weiss, would accent this style perfectly. 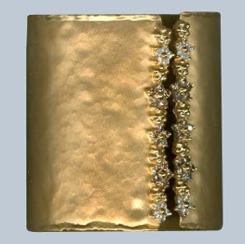 Rich velvet was an important texture for fall, and in this Gucci dress below we also see a skinny drop earring in matching green stones as the suggested accompaniment. Note the emphasis is not on filling in the expanse of bare skin with jewelry, but rather accenting it by drawing the eye up and out. 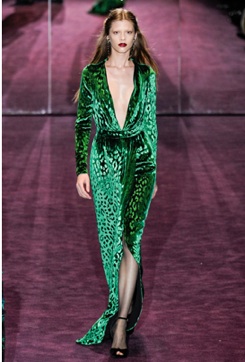 In the suit by Kenzo at the top of the page, as previously noted we see the military trend, but it also taps into the velvet trend and the pantsuit trend and, again, note the big button earrings.

Mazza's Classic Collection includes a wide selection of button earrings in a variety of colors and gem materials.

Finally, if gold is big news, big is even bigger news. At the New York shows, we saw the beginnings of big in shoulders and especially sleeves. Skirts were full. We also saw blanket prints, but in Europe skip the print and just grab the blanket and go, as in this oversized swaddler from Phoebe Philo at Celine, below left, or this shiny voluminous pantsuit from Proenza Schouler.  We haven't seen that much volume since the '80s, though nobody will admit to referencing the decade. But such massive garments also will require very strong jewelry to compete with the volume, so look for pieces like big chunky silver, freshwater pearls, gems or beads that can go the distance, such as the sterling silver and 24k gold necklace by Gurhan, bottom. 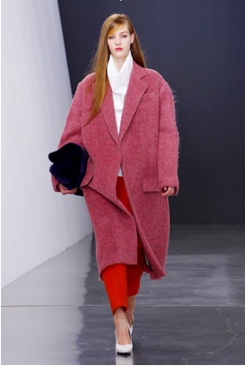 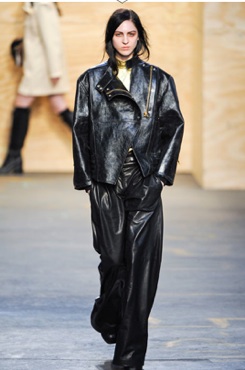 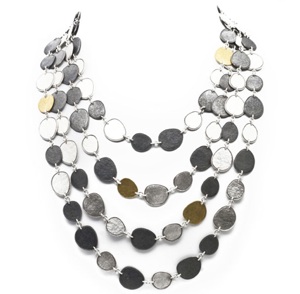 All fashion photos: IMAXtree for Elle.com.  Elizabeth I: Elizabethanportraits.com

Next article:
DIAMONDS OR MUTUAL FUNDS? HOW TO HAVE THE INVESTMENT CONVERSATION WITH YOUR CUSTOMERS