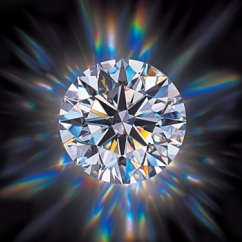 New York, NY—We’ve all heard the cynics who say diamonds would have no value if not for De Beers’ clever marketing. But panelists at a recent seminar explained just why, despite the cynics’ view, diamonds do matter.

The discussion, “Blinded By The Light: Why Diamonds Matter,” was held last month during the Initiatives in Art And Culture “White” design conference in New York. (Image at left: GIA)

Richard Wise: What can observing diamonds teach us?

John King: To a scientist, it’s telling us something about how the earth was formed. To a businessman, observing them will tell if he’s going to make profit or not. But for all of us as human beings, it’s about a creative process with amazing visual sensations.

John Hatleberg: In one of the papers John has written he said there’s something about the whiteness. It’s not just the optical qualities but the brilliance of the color. When you have an incredible white diamond, it exhibits whiteness in its fullest form because of its optics.

Richard Wise: That brings us to the question of whiteness itself. What sort of white is a diamond?

Ben Zucker: A very white diamond is the absence of color, but at edge the white light splits into prismatic color. When someone comes to my office to pick out an engagement ring, their transformation when see this is magical. If a cutter—like Edward Asscher’s grandfather, who pioneered a different style of cutting—knows how to fashion the rough it will balance white with the prismatic colors.

Richard Wise: Edward is a third-generation master cutter; he can give us an idea!

Edward Asscher: Why do diamonds matter? Two meanings. The first is emotional. Look at diamonds in rough and polished, they give you emotion and people that buy that diamond feel that emotion. Diamonds are sold on happy occasions. That’s the emotion I like so much, but rough diamonds can give an emotion to a cutter too.

John Hatleberg: There are lots of ways to address why diamonds matter. Although preciously finite they can become infinite when you break beyond its physical boundaries into the light going off into the universe.

John King: Technology has changed the industry immensely over a 20-year period, but ultimately it doesn’t change the fact that it’s like sculpture, and once you take it off you can’t put it back. How do you make the right choice to make the most beautiful diamond? The science has grown a lot but there’s still the art in those decisions.

Richard Wise: When diamonds are graded by GIA, it’s very much like a report card. So everyone wants to get a D. The first thing people look at is the report. How do you address that?

John King: It’s human nature to categorize and separate things, especially among Millennials. I think it’s a shame, because it still comes back to looking at the diamond. You’re not going to wear the report around your neck, and many grades can look beautiful. The reports—a combination of colorlessness but also superior transparency—will tell you about rarity and how difficult they were to obtain.

Edward Asscher: I look at reports a different way. You can have two that are equal in size and color and clarity and one speaks to you but the other doesn’t. Technically, those diamonds are the same, but I look at a lot of diamonds, and some are just diamonds, while every now and then you get a diamond and you say ‘wow, this is different.’ It has a character that talks to you, even if they have the same cut.

I tell my customers, ‘When you go into a store, you buy the diamond that speaks to you, that drives your emotion.’ There’s still one that you will feel the emotion and not the other. It could be the material itself, and it could be your observation.

Ben Zucker: When we think about a great diamond like the Koh-i-Noor, or at the Tower of London, or we look at old Indian gems, the whiteness seems to be a different level of beauty. Maybe it’s the cutting. Somehow the old Indian cutters, they had the material and somehow they had the vision.

John Hatleberg: The Koh-I-Noor is a classic four-grainer, a worn-off octahedron. Sometimes they were so laborious to cut that they [cutters] left naturals—part of the original crystal on the face of the stone. But I wonder if these Indian cutters saw some value in it. 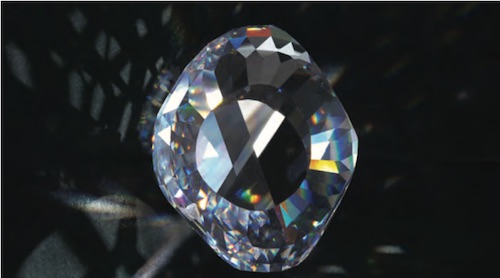 John Hatleberg’s replica of the Koh-I-Noor for the Natural History Museum of London and the Tower of London. Photo: Tony Pettinato.

John King: I wonder if some of the rareness and value of diamonds comes from those early discoveries in India. They had a lot of respect for that earthly form; maybe not a need or reason to go further than simple shaping to let it speak on its own. We do something very different that creates a beautiful object, but to a different end.

Edward Asscher: When you see a diamond whose provenance is very old, do you re-cut it? Maybe you do because even if you lose provenance, you get a much more beautiful diamond. Sometimes it’s the right thing to do.

John Hatleberg: When Laurence Graff cut the Wittelsbach Blue, I worked with him. What he did I thought was an improvement: after cutting it had more blue. But did the original facet patterns have more meaning, such as being modeled on inside of a mosque?

Richard Wise: I remember a Golconda stone, cushion cut, that you could hold up to light and see through it. It had a huge window that today is almost unacceptable in diamond cutting. I looked at it compared to a modern stone from South Africa. Both were Type IIa, so I went outside of our shop in the Berkshires to look at them in the sunlight. The Golconda stone glowed blue. But you can’t make it glow. You just wear it and all of a sudden it glows.

There’s no earthly reason why it should glow. The cert said it had no fluorescence. No nitrogen. But it still glowed occasionally although it shouldn’t have. When you have an object that has color and brilliance, then you understand why people buy diamonds.

John King: Coming back to the first thing Edward said about the emotion, it’s not a new thing. It’s also not something that was created by De Beers in 1940s with “A diamond is forever.” Any of these rare unique objects touches and transcends us in a way.

John Hatleberg: Gems are primal, living, seductive. Most powerful is the engagement ring and the diamond in the center that can take all those emotions and become part of the woman. They can project part of their identity and history into the jewel.

As a physical property, it goes back to hardness. At one time, only kings could wear diamonds, but going back to the 15th century and Mary of Burgundy, you see the rise of merchant class power.

Richard Wise: Let’s not also forget the natural crystal itself. In the 14th century, the finest diamond was described as an octahedron. They say there are no straight lines in nature, but there are straight lines in a diamond crystal. It doesn’t live, but it grows.

When it comes to quality, the certificates forget the subtle factors impacting a diamond. Those are not measured. Appreciation of diamonds is an extraordinarily complex relationship that comes down to what speaks to you.