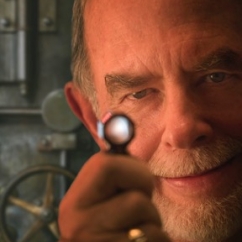 Scottsdale, AZ—Richard Wise, a former retail jeweler turned gem maven, gave attendees at the Centurion Show some advice from the trenches: if you want to make money, get into color.

A former retail jeweler, Wise knows well the many challenges other luxury jewelers face today. “The laws of commoditization are simple: whatever can be commoditized will be commoditized. What is keystone when almost everything jewelers sell has been commoditized in one form or another?” he asked. Jewelers used to sell tableware but the big box stores found they could sell it cheaper so jewelers stopped, he said. “Then the Blue Nile people come in and consumers immediately check their prices.”

Diamonds, especially since the advent of cut grades on reports, have become highly commoditized, he said. He doesn’t believe branding diamonds works so well. “You’re buying at a premium but they’re not any better than other ideals—and sometimes ideals are better and they’re 20% less,” he said.

But colored gems in top form are very rare and in Wise’s opinion will not become a commodity. “By becoming an expert in rare, high-end color, you will set yourself apart from all your competitors, you will attract an affluent clientele, and you will make very good margins,” he said.

He shared his own journey from struggling run-of-the-mill retailer to gem expert commanding top dollar. “Almost all gems are found within 20 degrees of the equator. It’s warmer than New England, especially in winter, and you can deduct it. In January, February, and March my store could miss me and it’s no big deal—and it’s nicest time of year there [in gem areas]. Other stores didn't do this. I took the extra markup. I was working on sometimes triple key, and the quality of my goods was better. After 30 years of that and of travel and asking stupid questions, I wrote a book. I knew I could tell people how to understand connoisseurship of rare gems.

“My shop was 1150 square feet in a resort town with a season of 10 weeks and no Christmas. I didn't stock quarter carat diamonds or change watch batteries, but I did a solid seven-figure business and I was able to retire in the very lowest echelon of the 1%,” he said bluntly. “Business can be like warfare, but victory does not always go to the stronger. Often it rewards the more flexible.” 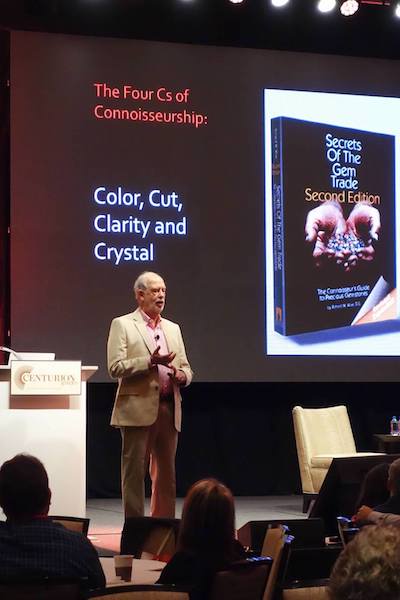 To get started, he suggested jewelers go to the gem shows in Tucson and look around. “There's your brave new world. If you want to stay in business 10 or 15 more years and you want keystone, you better get into color. It’s the only non-commodity out there.”

From there, it almost sells itself, he said. “Let your special clients know you’re going and dates, take orders, take lots of pictures on the trip, even on an iPhone. When get home you will have clients waiting!”

He got a huge newspaper article out of one of his first trips. The headline read, Jeweler Goes To Jungle For Gems, and Wise got huge publicity and sales from it.

“Usually the results will pay for the trip five times over,” he said. “Play the role! Get a safari jacket or camera vest, smear dirt on your face, and become the local gem expert. Tell a story!  One of the prime components of the sale is the story and if you go to the source and visit some of these places you will have a story!”

When he talks about his trips, his customers often are waiting for him to finish so they can buy the stone. “They’re going to buy because they see how enthusiastic you are,” he said. “If you educate yourself, have good relationships with your suppliers, and go to the source and become real jewelers, you can do it too,” he said.

His final piece of advice was about choosing the right suppliers. “When you deal in color, keep your clients close but keep your suppliers closer. You’re dealing in rare product and if you expect access to these very rare stones, it’s important you have access to good suppliers. Pay on time, keep your word, return memos promptly, pay on time, build partnerships, and pay on time. But clients will buy high-end rare color, so if you want a five-carat unheated Burmese ruby, only one or two dealers have them.”

Next article:
Four Bad Sales Types That Can Ruin A Good Team