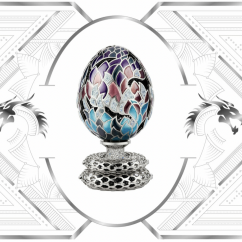 [Images: Courtesy of House Of Fabergé and Natural Diamond Council]

The show used many props to give life to its characters and sets — something that was adored by its millions of fans worldwide.

There was one such prop on the hit TV show that was made with much care — the $2.2 million Fabergé Dragon Egg.

Gemologist and storyteller, Richa Goyal Sikri, writes in Natural Diamonds about the conceptualization of this dragon egg — the idea's origin and how it became a reality.

Liisa Tallgren, Designer, Fabergé, tells Sikri that the purpose of the egg was to always "intrigue and delight." She adds, "By varying repetition and change, a rhythm is formed: for example, the Egg has enameled cells for a certain length, then, a section encrusted with natural diamonds,  followed anew by enamel. The smooth surface and subtle reflections of enamel are contrasted by the texture of the natural diamond facets and their lively sparkle. The visual variation generates rhythm.”

Read more on the making of the visual masterpiece in the original post by Natural Diamonds.