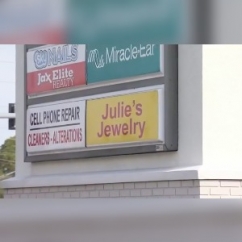 Jacksonville, FL--Surveillance cameras in a jewelry store on Atlantic Boulevard caught three people stealing merchandise at around 1:30 a.m. on Saturday.

According to a news report, the incident occurred at Julie's Jewelry and Appraisers, located near Girvin Road.

"They know what they are doing is wrong," said Julie Mihalakos in the report. "They are putting people out of business and that is wrong."

Julie, along with her son Saki, is frustrated after the attempt. "I do not know why. I was kind of upset and angry. I said to myself, 'here we go again," Julie stated.

Saki added that they are hard-working people and the "unfortunate" incident was a setback.

The burglary, which left much damage, took place at a new private showroom they were planning to launch over the next few months.

"They were masked pretty well though," Saki said in the report. "They are professionals. This wasn't just a 'break the glass, come in and try to snatch and grab.' This was carefully planned."

This is not the first time their 23-year-old operation has been a target. The report notes that the store was last robbed in 2017 — the man charged was involved in more than 40 smash-and-grab incidents.

The two now want nearby businesses to stay alert. "Understand that these things do happen," Saki explained in the report. "We just have to come together as we serve our community and all of these other small business owners."

The police are investigating the incident.

Learn more about it here.

Previous article:
How Jewelry Brands Find a Way Out Of The Supply Chain Crisis