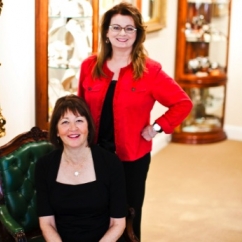 San Mateo, CA—A peculiar irony of the jewelry industry is that it used to be a male-dominated industry designing and selling a product that, for the most part, is worn by women. Only within the past two decades or so have women have become a major force in the industry, as well as the primary purchasers of many kinds of jewelry. Two women who were at the forefront of that shift are Colleen Rafferty (left, standing) and Diane Christensen (left, seated), who together own and run Christensen & Rafferty Fine Jewelry, “The Salon on the Second Floor” in San Mateo.

The Centurion caught up with Rafferty after a week of trunk shows with designer Stephen Webster. “It was a lot of fun,” said Rafferty. “We sold several pieces, created a lot of interest and planted seeds for future purchases.”

Trunk shows during the summer are a regular feature at Christensen & Rafferty. Coming in August, the duo is showcasing a trunk show with designer Emily Armenta of ARMENTA. “Summertime is quiet for a lot of people. For us, it’s a nice time of year,” said Rafferty. “A lot of our clients stay local. Along with trunk shows, we’ve also done some parties with a beach theme or thrown a pool party on our terrace (with a small pool brought in for the occasion). It’s fun. We make a conscious effort to do more trunk shows/events several times during the year.”

Rafferty also mentions a ‘class’ type evening event the Salon sponsored for customers. It was a class on pearls filled with a basic pearl education. “It was incredibly well received,” said Rafferty. “Our audience loved it. They learned where pearls are from, how they are harvested, general information.”

Christensen & Rafferty Fine Jewelry has recently tripled in size. “We’re an upstairs jewelry salon. It’s great to have more space,” commented Rafferty. “We have a beautiful terrace that runs the length of our space on the east side of the building.” The space is set up as a large patio, complete with lounge furniture. It’s been a convenient space to step outside and show a customer a piece of jewelry and to see gemstones in daylight. 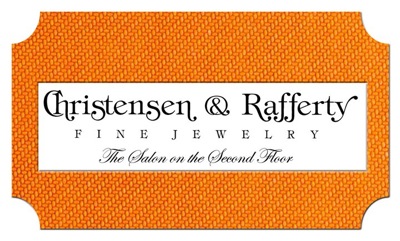 “We’re a destination,” said Rafferty. “We have a nice amount of traffic, although it’s sometimes sporadic. People stop in constantly.”

The story of how Christensen met Rafferty is an interesting one. The two both worked for Steiner’s Jewelry in San Mateo; Christensen for 27 years, Rafferty for 23 years. “We worked for a remarkable man; Ted Steiner was our mentor,” said Rafferty, remembering him fondly. “Eventually it was time to step away. With his blessing, we opened Christensen & Rafferty Fine Jewelry in 1995. He would come over and every morning, see if our shades were up [indicating they were inside] and ask, “What’d you sell yesterday, honey?” and have a cup of coffee. He was very much a part of our lives for many years.”

The two owners do divide some of the work, but both are fixtures on the sales floor. “We do have staff that sells, but we are generally the ones that are out on the floor with clients.” Beyond sales, Christensen is helpful on the financials with the bookkeeper, and Rafferty takes care of merchandising. Both buy, traveling together to select their inventory. 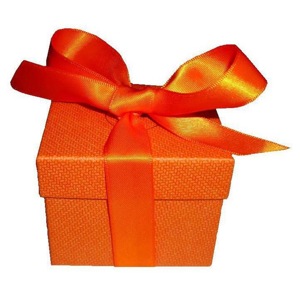 “We initially closed for a week when we traveled to JCK, which was difficult but necessary. Today with Joy Rudkin (Christensen’s daughter), Coreen Gutierrez and Marcia Bianchini on the sales floor, that’s not necessary.” The sales team has traveled to JCK with Christensen & Rafferty; the ladies chose that trip this year over going to Conclave. “When they returned, they were exhausted, but they got to see what we go through,” said Rafferty. “They saw it was not a Holiday, and they saw how the business works from that end. They really enjoyed the experience.”

Along with the expert sales team on the salon floor, Christensen & Rafferty also employs an administrative assistant, Lulu Wu and the bookkeeper, Monica Kundnani, who Rafferty says “is the most important person here!”

And how do the two principals work together? “We’ve been together longer than most marriages. We each certainly have our personality, our own thought process on how we’d like something to work, be it financials or store events. We certainly respect each other most highly and give each other space. We work things out. Everyone has to have their say,” says Rafferty. “Our space is such that we may not even talk to each other during the day. So we’ll put questions in an email; that way, it gets responded to.”

Most of Christensen & Rafferty’s clients are women, the coveted demographic of women self-purchasers. “That’s the bulk of our business,” said Rafferty, noting that they do sell to couples and also to men.

To reach their customers, the owners rely on direct mail, their website and social media. “In our area, our advertising market is extremely expensive [for radio, TV and billboards]. What does work is direct mail, events and Facebook. We also stay visible in our community.” 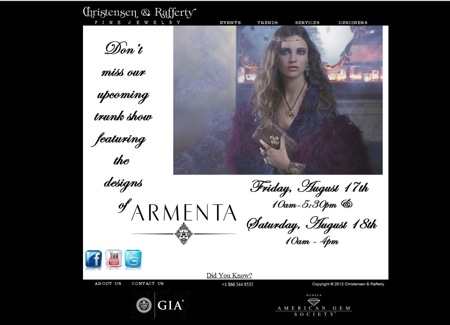 Diane and Marcia are both Rotary members; Rafferty is in the local Downtown Association, and various community auxiliaries, and the two actively encourage their employees to get involved. Everyone at the Salon is very supportive of their local hospital. Christensen & Rafferty has been honored with numerous awards for their community achievements. “Community involvement doesn’t translate directly to sales, said Rafferty. “It doesn’t come back to you right away. But it does come back. The consistency of seeing that you are a business in a community that cares is what works in the long run. And hopefully that will come back to you in revenue at some point.”

Along with community involvement, social media plays an important role at the Salon. There’s a YouTube Channel devoted to Christensen & Rafferty, with a dozen videos posted, including one that offers the viewer a visual tour of the Salon, from the outside to the inside. Click here or on the image below to take the tour: 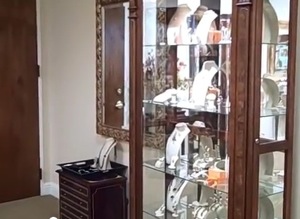 Facebook plays an important role in communicating with customers. Rafferty’s niece, Bernadette Lemberger, who has her own web company called www.berndesigns.com, does the store’s social media management.

“I find it interesting that Bernadette reminds me constantly to remember that people are lazy on Facebook! They may not respond with ‘like’ or post a comment, but they still see it. They are still looking at your posts. If you are doing it consistently, you’ll see results. Our customers love seeing what we are up to,” says Rafferty.

On Facebook, the staff posts twice a day. Bernadette does five weekly posts such as Trends, Bridal, ‘Throwback Thursdays’, and such. And each staff member posts on a particular day. It doesn’t have to be jewelry related, however. “Jewelry, recipes, walking tours, movies, a local hat shop, whatever. The point is to engage and tell a story. It’s not about trying to sell. It’s about letting them know who we are. It is working,” said Rafferty.

Their creative grass-roots efforts are part of what set Christensen & Rafferty apart from their competition. “I think that when you have a great mix of women, that you have a lot of creativity,” said Rafferty. “The fact that our store is run by women and owned by women, well, we are very proud of that.”

Next article:
IN MEMORIAM: HILDGUND BUCKY, FOUNDER OF “HILDGUND AT DAWKINS BENNY JEWELERS”