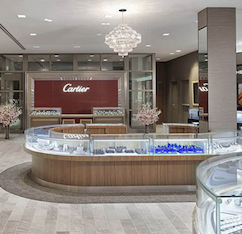 Chicago, IL—C.D. Peacock is gearing up for a major year of transition, both in leadership and in opening a major new location. 2022 marks the jeweler’s 185th anniversary.

C.D. Peacock, founded in 1837, is the oldest retailer in Chicago, having even survived the Great Chicago Fire of 1871. Its customer list reads like a historic "who's who" of Chicago and Illinois citizens as well as today’s internationally famous athletes, entertainers, and other celebrities. Just a few include George M. Pullman (inventor of the sleeping rail car), Marshall Field (of department store fame), First Lady Mary Todd Lincoln, and the Rolling Stones' Mick Jagger.

Charles Daniel Peacock, son of founder Elijah Peacock, changed the store's name to C.D. Peacock in 1889. The Peacock family owned the business for another 80 years, selling to Dayton-Hudson (now Target Corp.) in 1969. Men's apparel magnate Seymour Holtzman, its current owner, acquired it in 1993. The jeweler has three stores in affluent Chicago suburbs and is an authorized dealer for both Rolex and Patek Philippe, as well as other top luxury watch brands like Cartier, IWC, Panerai, and luxury jewelry brands like Hearts On Fire, Roberto Coin, Cartier (image), and more.

C.D. Peacock announced the months-long succession plan for Seymour Holtzman’s son, Steven, and daughter-in-law, Qi, to assume leadership effective this month. Steven Holtzman assumes the position of vice chairman as the couple have relocated from Switzerland to Chicago. A global industry veteran, Steven’s expertise spans three decades in the Swiss luxury watch market, working with the most prestigious retailers in Europe, Asia, and the Middle East.

Also on tap for its 185th anniversary year are plans for one of the largest watch and jewelry stores of its kind in the flagship mansion at its location in Chicago’s Oakbrook Center, opening in late fall 2022.

“Chicagoans can expect to see C.D. Peacock fanning its vibrant feathers in new places, with unique concepts and strong luxury brand partnerships to serve future generations,” says Steven Holtzman. “Qi and I are honored to be overseeing one of the most exciting times in our company’s history.”

The Holtzmans plan to incorporate global luxury concepts to influence one of the first-of-its-kind, 20,000 square-foot indoor-outdoor spaces. The flagship mansion will include a lounge, restaurant, and VIP rooms.

“We are Chicago. The House of Peacock was the first registered business in Illinois in 1837. We are proud of our heritage and continue to invest in the region. By significantly boosting the retail sector with another ‘first,’ C.D. Peacock continues to exceed consumer demands for exceptional quality, impeccable service, and an elevated shopping experience,” says Holtzman.

Holtzman adds, “The investment in our flagship mansion at Oakbrook Center--where 20 million visitors annually spend over 1 billion dollars--is a natural choice as consumer lifestyles and spending shift to the suburbs. Open space, eclectic restaurant offerings and ample free parking combine to provide the perfect backdrop for our new location, which will redefine the way consumers shop for luxury.”