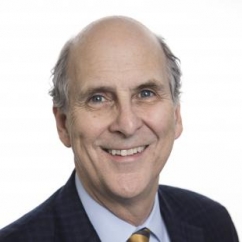 Washington, DC—The National Retail Federation is bullish on the American economy. Coming up on two years since the short-lived 2020 recession, the United States appears to be at the midpoint of an economic cycle that should continue to see growth even as the Federal Reserve raises interest rates to bring inflation under control, NRF chief economist Jack Kleinhenz (image) said last week.

“The maturing economy remains in growth mode and there is good reason to expect it will soon approach normal trends. Despite ongoing challenges, we are clearly still in an expansion phase. The question is how long it will last as policymakers strike a delicate balance between encouraging growth and taming inflation,” said Kleinhenz.

“It is not clear how Fed policy will develop, and there will be indigestion as we adjust to new policies,” he continued. Nonetheless, both households and businesses are “in good financial shape,” COVID-19 is having less of an impact on economic activity “and there is plenty of room to raise rates without threatening the economy,” he said.

Kleinhenz’s remarks came in the February issue of NRF’s Monthly Economic Review, which said the economy “is running hotter than it has in a long time” despite the end of federal intervention like stimulus checks and expanded unemployment benefits. The economy “is sturdy enough to stand on its own and can sustain itself toward a growth environment without the pandemic stimulus and monetary policy policies of the past two years,” the report said.

Gross domestic product was up 5.7% in 2021 vs. 2020, the fastest growth for any calendar year since 1984, and household spending continued to grow in the fourth quarter even though not as quickly as earlier in the year. Kleinhenz expects GDP to grow between 3% and 4% in 2022, still faster than the 2.3 percent annual pace during the 2009-2020 expansion that the pandemic ended.

The rapid increase in economic growth has come amid the highest inflation in nearly 40 years, with the Consumer Price Index up 7% year-over-year as of December, according to the Bureau of Labor Statistics. In response, the Federal Reserve said last week “it will soon be appropriate” to raise interest rates to tighten the availability of credit and help bring inflation under control. Rate hikes will make mortgages, car loans and other credit more expensive, but “households are poised to spend” anyway, partly because of savings accumulated during the pandemic, Kleinhenz said.

The recovery follows the brief-but-intense recession seen in early 2020, which the National Bureau of Economic Research said lasted only from February to April and was the shortest in U.S. history. Kleinhenz said the “quick, deep decline” followed by a “fast, steep recovery” amounted to an economic “mini-cycle” in sharp contrast to normal economic cycles that have averaged about five-and-a-half years of gradual shifts from expansion to recession and back since the end of World War II.

Understanding economic cycles is important as policymakers consider appropriate policy moves: “The key to extending the expansion is to balance growth, inflation and interest rates,” Kleinhenz said. “Clearly, this expansion is different from the past, and the policy approach will be different.”

Kleinhenz’s comments come along with a robust jobs report for January. The United States saw a gain of 467,000 jobs in the first month of the new year, far stronger than the 150,000 new jobs economists expected to see. Almost all major industries saw gains, though leisure and hospitality led the way with 151,000 new jobs. Retail, logistics, and business services jobs also increased.