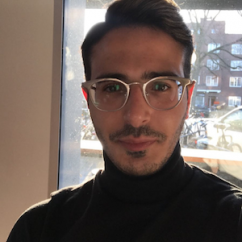 Tel Aviv, Israel—If you see this man, don’t sell him a diamond. And whatever you do, if you’re female, don’t go on a date with him. Image: VG (Verdens Gang).

A new Netflix documentary titled “The Tinder Swindler” details the MO of one Shimon Yehuda Hayut, aka Simon Leviev, who swindled dozens of women out of hundreds of thousands of dollars to finance a lavish lifestyle.

Born the son of a poor Israeli rabbi, Hayut has been a con artist since his teen years, assuming multiple aliases and careers, including that of a professional pilot and, most famously, diamantaire. But not just any diamantaire: he posed as the CEO of LLD Diamonds, the world-renowned brand owned by diamond mogul Lev Leviev. Claiming to be Leviev’s son, Hayut legally changed his name to Simon Leviev in 2017 and dubbed himself the “Prince of Diamonds,” as befitting a son of Leviev, who’s known as the “King of Diamonds.” LLD is fully vertically integrated with ownership in mines, its own cutting factories and, of course, distribution.

But there’s one problem: although the fake Simon Leviev does know enough about diamonds to pull off the disguise, none of Lev Leviev’s real children are named Simon. The company has posted a disclaimer on Instagram, disavowing any connection to Shimon Hayut or Simon Leviev. 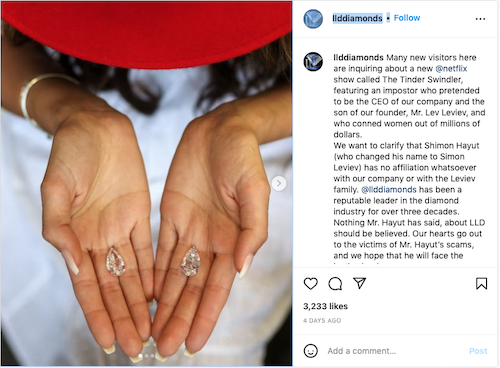 Hayut aka Leviev played his part well. After sweeping right to find his marks on the dating app Tinder, he’d sweep them off their feet like a real-life Prince Charming, meeting them in luxury hotels, feeding them caviar and champagne, and whisking them off for romantic weekends in a Rolls Royce or private jet. Always on the go, he never stayed more than a few days, and each relationship was mainly conducted by text and WhatsApp. Gradually, he’d spin a tale about his enemies in the diamond world tracking him via his finances—including faked bloody photos of himself and his bodyguard—so he’d ask each girlfriend to open an American Express card for him in their own names, as well as lend him large sums of money to “tide him over” until it was safe to come out of hiding. Because Leviev’s real son Zevulun was arrested in 2018 on charges of diamond smuggling, the story was plausible. 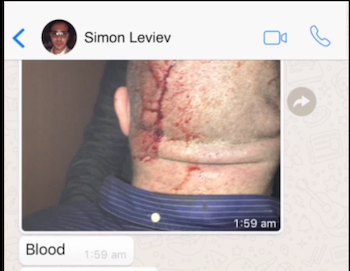 Shimon Hayut, aka Simon Leviev, sent the same bloody pictures of his supposed bodyguard, above, and himself, below, to at least three of his girlfriends. Images: VG (Verdens Gang). 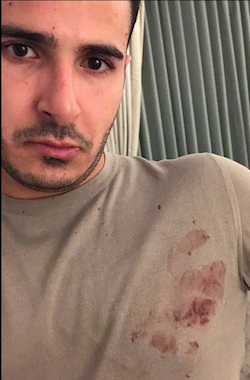 Of course, there were no hitmen and would be no repayment to any of the women. Forged documents would show repayments, often twice the original loan amount, but of course the money never cleared. As if that weren’t enough, Hayut was using each woman’s money to finance his next relationship in what basically amounts to a romantic Ponzi scheme. Having already fled Israel to avoid other fraud charges, Hayut continually eluded authorities—just like another infamous diamantaire, Nirav Modi.

But if hell hath no fury like a woman scorned, try a woman who’s been bilked out of a quarter million dollars.

Tipped off by victim Cecilie Schrøder Fjellhøy, a Norwegian grad student living in London who reported Hayut to both Norwegian and British authorities after losing more than $250,000 to him, the Norwegian news outlet VG (Verdens Gang) conducted an exhaustive investigation that spanned the European continent and Israel. The finished story went viral and ultimately led to the Netflix documentary.

In its investigation, VG contacted Pernilla Sjoholm, a Swedish marketing executive that reporters traced through Fjellhøy’s bank statement. She too was awaiting repayment of loans to Hayut, her suspicions confirmed when the Audemars Piguet watch Hayut gave her as collateral turned out to be fake. She worked in cooperation with VG, meeting Hayut in Munich while reporters watched. But when he spotted the reporters’ camera trained on him from across the street he grabbed Sjoholm and dragged her on a terrifying car chase through the city. 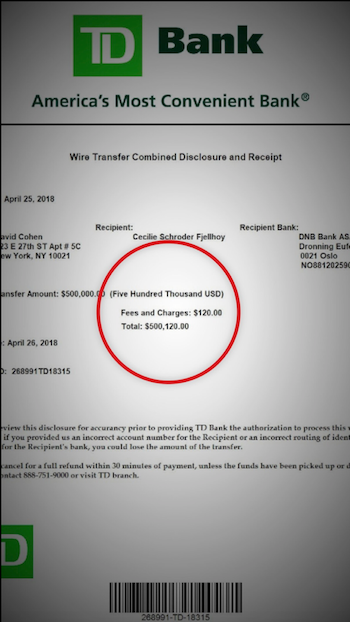 Documents such as this wire transfer receipt from TD Bank would briefly mollify each of Hayut/Leviev's victims--but the money never cleared. Image: VG (Verdens Gang).

It was his Dutch victim, Ayleen Charlotte, who was dating him the longest and got the ultimate revenge. Working in the luxury fashion industry, she realized how much money was invested in Hayut’s designer wardrobe, so when he went underground and contacted her for money, she suggested he sell his clothes and use the money to live on. Surprisingly, he agreed, so she took his entire wardrobe home to sell on eBay for him. The money racked up, but the conman never saw a penny of it. For Charlotte, the money she gained from eBay added up to a fraction of the $140,000 she’d lost to him, but the satisfaction she gained made up for it.

Thanks also to a tip from Charlotte, Interpol arrested Hayut in Greece in 2019 and extradited him to Israel, where he was sentenced to just 15 months in prison for fraud. In May 2020, between good behavior and concerns about COVID-19, he was released early—to the great consternation of his victims—and is now living as a free man and trying to build a business consultancy. At press time, he had not been charged in any other country.

Since the documentary was released, Tinder has banned Simon Leviev and he voluntarily deleted his own Instagram account, but before he did he posted that he will tell his side of the story.