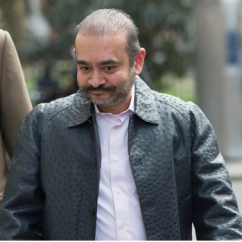 London, UK—Nirav Modi (left), the billionare Indian diamond dealer who disappeared last year after being charged in one of India’s biggest cases of bank fraud, is alive and well and living it up in London. A report in The Telegraph says not only is he living in London, he’s living quite well—and still dealing diamonds. Meanwhile, the muck surrounding him and his uncle, Mehul Choksi, gets deeper. Image: Eddie Mulholland for The Telegraph

Reporters from The Telegraph tracked Modi to an £8 million ($10.48 million) apartment in London’s tony West End, walking distance from an office in Soho where he’s reportedly listed as a wholesale trader in watches and jewelry. When the Telegraph confronted him (video below), he was wearing an $11,000 ostrich-hide jacket and sporting a handlebar moustache and responded “no comment” to every question put to him by the reporter. An employee at his new business also declined to comment to the newspaper.

The new business was incorporated last May. The Telegraph also learned that Modi was given a UK national insurance number, has been able to operate online bank accounts from the UK, and has been in contact with a wealth management company that specializes in working with rich foreigners.

An Interpol red notice—a request to locate and provisionally arrest an individual pending extradition--was issued last July for Modi at the request of Indian authorities. It’s unclear why the British government ignored the extradition request and supplied an insurance number, said the article, but already India is demanding answers and it may spark tensions between the two governments, both of which are facing pressing domestic issues. 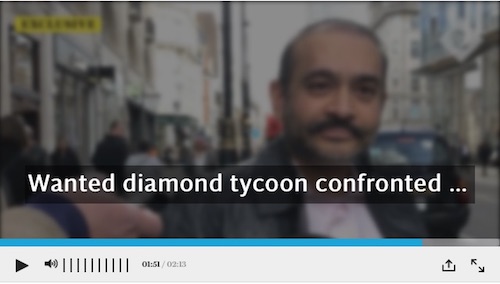 Nirav Modi confronted by The Telegraph in London last Friday. CREDIT: PAUL GROVER FOR THE TELEGRAPH 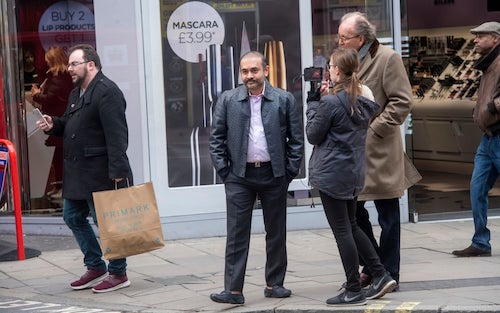 Modi was wearing a £10,000 ostrich hide jacket when confronted in the street by Telegraph reporters. CREDIT: EDDIE MULHOLLAND FOR THE TELEGRAPH

Meanwhile, it appears that the now-defunct Samuels Jewelers may have fraudulently sold lab-grown diamonds as natural. A similar claim was made last year against Nirav Modi’s boutiques.

The Samuels chain, part of the Gitanjali Group owned by Mehul Choksi, closed last month. An Indian Express report says “US investigators have found that Independent Gemological Laboratories (IGL), a diamond grading firm that graded the quality of diamonds sold by Samuels Jewelers to its retail customers, is owned by a BVI [British Virgin Islands] entity controlled by Choksi’s sister and a few of his close associates” and identified at least one instance of a lab-grown diamond being certified as natural.

Choksi, along with Modi and other family members, slipped out of India in January 2018. Although now a citizen of the Caribbean island nation of Antiqua and Barbuda, Choksi reportedly applied for UK registration of a new Dubai-based company just days ago.

Next article:
Want to Build Trust with Your High-End Jewelry Store? Send One Key Email Today