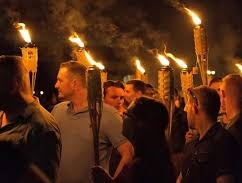 Merrick, NY—Last weekend’s tragic rally in Charlottesville, VA offered yet another reminder that we are still learning just how powerful digital media can be. As photos of the event went viral online, a Twitter account sprang up to name and shame participants. Within a day, at least one individual whose identity and hometown were tweeted was fired from his job following public pressure on his employer.

Can they do that? Can you do that?

In a word, yes. Or more accurately, sometimes. Freedom of speech is, of course, guaranteed in the First Amendment of the United States Constitution. But what, exactly, does “freedom of speech” mean? In its simplest terms, it means the government can’t prosecute citizens for voicing an opposing opinion, but it doesn’t guarantee there won’t be private consequences. Even political messages are not protected if they contain words or phrases deemed offensive (Cohen v. California, 403 U.S. 15 (1971)).

Katherine Stone, a labor law professor at UCLA, told The Atlantic in this article that federal law doesn’t offer any protections for expressing political views or participating in political activities for those who work in the private sector and don’t have a contract stating otherwise. There are exceptions, such as workers covered by a union contract protecting them or those who work in states or municipalities that do have such a law, but for the most part an employee can be fired for outside behavior that could reflect poorly on their workplace.

Jon Hyman, an attorney who wrote this article in Workforce.com says [an employee] “has the constitutional right to hold whatever opinion he wants to hold. And he even has the constitutional right to peacefully express those opinions, no matter how vehemently one might disagree with his point of view. Those rights are what make America great. Those constitutional rights, however, stop at a private employer’s door. And I, as a private employer, have the right to hold my employees accountable for their viewpoints and terminate when I, in good faith, determine that those viewpoints may bleed into my workplace and create a hostile environment for other employees.”

But if Cole White, the California protestor that was fired from his job at a hot dog restaurant for participating in the Charlottesville rally decides to sue his former employer, who is likely to win? It’s a murky area. An earlier article in the Harvard Business Review cites multiple incidents where employees dismissed for off-duty conduct sued their former companies and won. And in the case of Cole White, California law does, in fact, prohibit employers from taking adverse action against employees because of legal off-the-clock political activities, according to this article from Littler.com, the website of the law firm Littler Mendelson.

When constitutional rights are in question, the HBR article says an arbitrator or court will contravene them only in extreme situations where there is a threat of danger or violence. But if White decides to sue, his case might qualify: HBR describes a Baltimore bus operator who was also the acting grand dragon of the Maryland chapter of the Ku Klux Klan. When that became news, fellow bus operators threatened a wildcat strike, and the possibility of a public boycott of the whole bus network arose. The Baltimore Transit Company discharged the grand dragon on grounds that there was a clear and immediate danger of violence, and an arbitrator sided with the company.

Because the Charlottesville rally turned violent, there’s no way of knowing what might have been different in any potential lawsuits if it hadn’t.

What can you do to make sure you don’t suddenly find one of your employees making front-page news for the wrong reason—or to protect yourself later if they are?

For a start, HBR recommends establishing written and specific prohibitions against off-duty conduct that management regards as unacceptable. Some things are easy, like automatic discharge for a guilty plea or conviction in a felony case. But for things that are less clear cut—behaviors that may offend a manager’s personal beliefs but are not a crime, have no connection to the worker’s job, and don’t impact the business—tread very lightly and consult a labor attorney before taking any actions.

Previous article:
Reorder Your Way to a Profitable Year