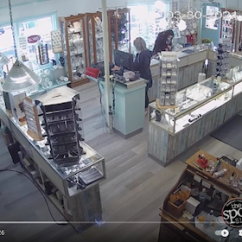 Delmar, NY—During the pandemic, many jewelers introduced drive-up service or curbside delivery, but at Joyelles Jewelers in upstate New York, a motorist took that a little too literally and crashed into the side of the store (image).

The incident occurred March 30, about 10:43 a.m. Staff and customers were inside, but all were luckily unhurt. Store security video shows the vehicle just missed the center of the showroom where shoppers and staff were standing.

The driver of the car told police their foot slipped off the brake and hit the accelerator. No charges were filed or tickets issued and the driver’s identity was not released. The driver was unhurt as well.

Spotlight News reports the building sustained damage, as did showcases and merchandise along the wall where the crash occurred.

Next article:
GEM Awards and JA National Convention Will Be Virtual