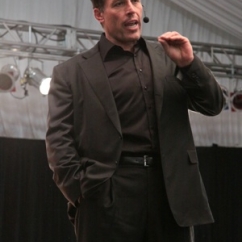 Tucson, AZ—Tony Robbins, the noted inspirational speaker and executive coach had Centurion Jewelry Show attendees jumping out of their seats—literally—over his words during the recent edition of the event.

Robbins was the opening keynote speaker for the 10th anniversary celebration of Centurion, held January 29-February 1.

“I love your industry!” he began. “You light people up!” That was enough to endear him to the audience, even before he began discussing his techniques for leadership and success.

“If you’re going to be a leader, you have to take advantage of every season,” he said. Metaphorically speaking, “some people still think it’s winter.” But 60% of Fortune 500 companies began in an economic winter—either a recession or the Depression—he pointed out. Most people withdraw and start to dwindle in such a climate and they no longer add value to their organizations.

“Biography is not destiny! People who were brought up privileged often end up in rehabilitation, while people who had a tough upbringing often do great things,” he said. His favorite example—and one where he’s often appeared—is Oprah Winfrey.

But if biography is not destiny, decisions surely are. America, he said, has changed from a culture of personal responsibility to a culture where people would rather sue someone else to get a piece of the pie.

“We’re so damn scared to be responsible if things go wrong,” he said.

1) A leader is someone who sees things as they are, not as worse than they are.

2) A leader sees things as better than they are. Without that, there’s no vision. For example, people told Ted Turner he was nuts for launching CNN. Now 24/7 news is the norm.

3) A leader will make things the way he sees them. Why do people get information but then not follow through? Strategy is important, says Robbins, but you can’t just “squat without a story,” as he puts it. Jewelers, he said, should already be expert at the story. “You guys are selling a story!  It’s a friggin’ rock, for Pete’s sake! You’re selling the story!”

There are patterns to human behavior, Robbins explained. The difference in the quality of people’s lives are their stories and their states. A state is moment-to-moment; one’s story is long-term. But ultimately, our lives are shaped by our decisions.

“It’s your decisions, not your conditions!” he barked.

First, get moving, he told the audience. Energy makes the difference. “95% of people after three weeks will forget 90% of what someone said, but only 50% if they wrote it down. Just the act of writing increases retention.”

Three decisions. To prove his point, he made the audience get up and, literally, jump around. Moods increased noticeably after the exercise. After that, he threw out the first decision we all need to make: What will you focus on? 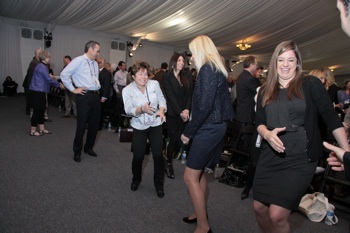 Tony Robbins made his audience get up and move!

Then they run for medication. But antidepressants don’t change focus, he said.

A second decision we make every day is “what does this mean?” Things are always changing and one can view each change as an end or a beginning. If you think about an end as a beginning, it changes your focus.

“Meaning equals emotion, and emotion equals life,” he said. How many people have tons of money and are still miserable? Contrast that with the people of the island of Fiji, many of whom have very little, but are among the happiest people on earth.

The third decision we make in life is what we do.

“What influences our decisions? Our state—when we’re in a bad state, we make bad decisions.” That in turn affects our story, or our long-term blueprint for life.

Move your butt! The basis of state is energy—which Robbins can't emphasize enough. It was time for the audience to stand up and move around even more.

“Emotion is created by state. Change your physiology, change your state. Move!!” he barked.  “Age has nothing to do with chronology and everything to do with physiology. Move!!” He related the story of a nun in her ‘80s who has successfully completed many ironman triathlons—starting in her senior years. She was really angry when one competition forbade entrants over age 65, so she simply did the event without being an official participant.

We live in a cultural hypnosis, he said. Age in the United States has a negative connotation: over the hill, washed up, and so forth. But age in Asia has a very positive connotation of wisdom and reverence for wisdom. We learn in a passive state (“Sit down, shut up, wait for instructions,”) but 20th century schools trained for 20th century jobs, such as an assembly line. The world doesn’t work with silence anymore, or with sitting in a boxed-in place.

“If you want to get a new result, you need new behaviors and actions. People can sense the state you’re in.”

Peak performance comes from being in a peak state. To get there, perform a series of routine behaviors. Ask yourself daily what you’re most grateful for, what you’re most proud of, what excites you the most.

“If you ask a person who’s trying to quit smoking and they say ‘I’m on Day Six,’ they will fail. If they say, ‘I’m not one of those; I’m not a smoker,’ they will succeed.” 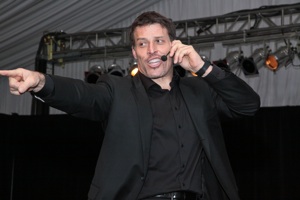 Raise your standards if you want change, says Robbins.

He wrapped up the presentation with more takeaway tools. “When the old voice says, ‘who?’ and you bump into the old story or the old blueprint, write down five things that are total BS about the old story. You can’t get to the truth without identifying it.

“What would I set as my goal if I had no fear of failing?” There is a cycle to success, he finished. Potential leads to action which leads to results which leads to belief and certainty that one has potential. And so it goes around, endlessly. It’s up to us to determine whether the direction will be a downward spiral or an upward growth.