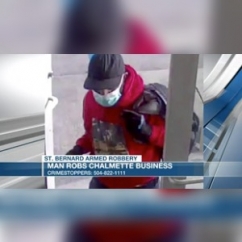 Chalmette, LA--A gunpoint robbery occurred at a jewelry store in the 8100 block of West Judge Perez Drive earlier this month.

According to a news report, the suspect entered the store at around 6:30 p.m., pointed a gun at store employees, and started demanding cash and merchandise.

Per the report, detectives investigating the case have obtained video footage from surveillance cameras. The suspect is said to be 5'9" tall, weighing about 150lbs.

The report notes that he was seen wearing a red hoodie on blue jeans, along with brown work boots and black surgical gloves, and a blue surgical face mask. He was also carrying a navy blue or black backpack.

Next article:
Distraction Thieves Get Away With Jewelry Worth $20,000 In St. George Store