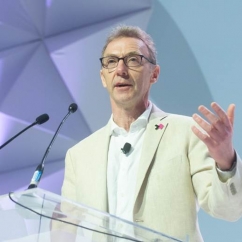 Stamford, CT--Charles Stanley, president of De Beers Brands in North America, is retiring after more than 20 years with the diamond mining and marketing giant. He will hand over his official duties this month and remain through the end of February to ensure a smooth transition.

Céline Assimon, CEO of De Beers Jewellers and De Beers Forevermark, will fill in for Stanley on an interim basis until De Beers names a permanent replacement.

Stanley rejoined De Beers in 2010 – having previously worked for the business from 1994 to 2003 – and has played a key role in growing the De Beers Forevermark business in North America, overseeing several high-profile campaigns and significant evolutions in the business’s commercial offering, including the development of its e-commerce proposition, De Beers said in a statement. He also played a central part in representing De Beers in the wider industry through his roles in a range of diamond and jewelry trade associations.

“It has been my pleasure and honor to have worked at De Beers for more than 20 years, first in London and then as president of De Beers Brands North America for the past 12 years,” Stanley said. “I will leave with great respect for the integrity and values that define the company and the way it works with all its stakeholders and partners in this wonderful industry. I am proud of everything I have been able to accomplish over my time with De Beers, all of which has been made possible by the collaboration and support of my colleagues across the business and our valued partners. To all of you, I would like to say a heartfelt thank you.”

“Since I joined De Beers, it has been a privilege to be able to call on Charles’ expertise and experience, both as the De Beers Forevermark business has evolved and grown in a fast-changing external environment, and as we have sought to integrate our broader downstream activities into a ‘one De Beers’ approach,” Assimon said in the statement. “Charles’ deep passion for diamonds and the diamond industry has always shone through, and all of us at De Beers thank him for his huge contribution over the years and wish him well for the future during his retirement.”

She continued, “While Charles is leaving, I am really looking forward to working even more closely with the excellent De Beers Brands team in the U.S. that he has built over the years while we continue to seek his long-term replacement.”