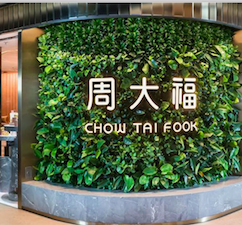 Milan, Italy—Chow Tai Fook Jewellery Group, the world’s largest jewelry retailer and the parent company of both the Hearts on Fire and Mémoire brands in the United States, has become a member of CIBJO, the World Jewellery Confederation.

Founded in 1929, the Hong Kong-headquartered group’s portfolio comprises, in addition to its American brands, the Chow Tai Fook flagship brand, and other individual brand names, including ENZO, SOINLOVE and MONOLOGUE. Its extensive retail network of more than 4,590 stores covers Greater China, Japan, Korea, Southeast Asia, and the United States, and it also operates a fast-growing e-commerce business. The group’s shares have been listed on the Main Board of the Stock Exchange of Hong Kong since December 2011.

“We would like to thank CIBJO president Gaetano Cavalieri and the board of directors for welcoming us,” said Kent Wong, Chow Tai Fook’s managing director, Corporate and Hong Kong, Macau & Overseas. “We are grateful to be able to work closely with all members for the continuous development of the industry. CIBJO, whose mission it is to promote international cooperation, has embarked on a range of initiatives to elevate and bolster consumer confidence.”

“Being an industry pioneer with over 90 years of heritage, we understand the need to innovate and stay united to make a truly positive difference,” he continued. “In order to fulfill these ideals and promises, it is important that we work collaboratively with our industry peers, bringing in innovative insights. Only when we do so can we herald a new era of growth and synergy.”

“Chow Tai Fook’s becoming part of the CIBJO community represents a giant milestone, and will provide our confederation with a considerably broader perspective, not only in what are several of the fastest growing markets in the global jewelry trade, but also in the online environment, which is consuming an ever larger share of sales,” said Cavalieri. “Just as the group has led the way in Asia and elsewhere, we expect it to take a leading role in CIBJO.”

Next article:
Diverse Trio Of Women To Be New Faces Of Tiffany & Co.