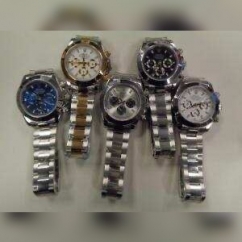 A release by CBP notes that the counterfeit jewelry and watches, intercepted August 5 and 6, if real, would have been worth over $6.88 million.

The release said that the first shipment originated from Hong Kong and was destined for a private residence in Richmond, Virginia. Although it had a declared value of $319, the package, which arrived August 4, held 275 assorted Cartier Love bracelets. Had the 275 bracelets been genuine, the Manufacturer's Suggested Retail Price (MSRP) would have been $3.27 million.

"These large seizures illustrate the work our officers do every day to protect our country, its citizens, and the economy," said LaFonda D. Sutton-Burke, Director, Field Operations-Chicago Field Office, in the news release. "Our officers are dedicated to preventing counterfeiters from defrauding consumers and legitimate businesses."

On August 5, CBP officers seized another shipment from Hong Kong containing 13 fake Rolex watches, 10 Cosmograph Daytona, and three Yacht Master II. The news release stated that the counterfeit watches were heading to a business in Mesquite, Texas. Had there been genuine, the MSRP for these watches would have been over $405,000.

"CBP is responsible for enforcing nearly 500 U.S. trade laws and regulations on behalf of 49 other federal agencies," said Richard Gillespie, Port Director, Cincinnati, in the release.

The rapid growth of e-commerce enables consumers to search for and easily purchase millions of products through online vendors, but this easy access gives counterfeit and pirated goods more ways to enter the U.S. economy. U.S. consumers spend more than $100 billion every year on intellectual property rights (IPR) infringing goods, falling victim to approximately 20% of the counterfeits that are illegally sold worldwide.

Link to the original release.