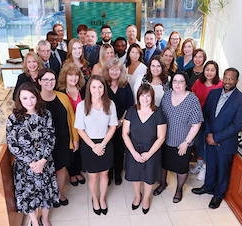 The jeweler, a Rolex dealer, is one of the industry’s oldest, having been founded in 1887 by Rudolf Joseph Henne. The store began as a vision as Henne and his wife, Margaret, made a $5 downpayment on a building located at 6018 Centre Ave. in the East Liberty section of Pittsburgh.

Henne began selling and repairing watches for the railroad industry, a critical part of the pre-Industrial Revolution American economy. As was common for many jewelers of the time, Henne Jewelers also was an optician.

In 1935, the store was taken over by Rudolph's son, Rudolph G. “Gerry” Henne, who managed it through the Great Depression, two world wars, and the postwar boom.

But by the time third-generation Jack, Gerry’s son, took over in the 1975, a dramatic change had come to the economy of Pittsburgh. The demise of the steel mills led to a troubled city, but not for long. Today, the city is again thriving and desirable, as the region has undergone a complete revival as an emerging tech hub thanks to “eds and meds.” More than a dozen colleges, universities, and nationally-ranked healthcare systems are based in the Pittsburgh area.

In 1999, fourth-generation John, Anne, and Meg Henne joined the business. It was then the jeweler became a Rolex dealer, as well as adding a focus on engagement rings and bridal jewelry. A few years later, it expanded into its current location on Walnut Street, also in Shadyside.

Today, John Henne is president, leading the 22-person staff of employees, and third-generation Jack Henne and Nancy Henne also are owners and are frequently found on the sales floor, to the delight of longtime customers. 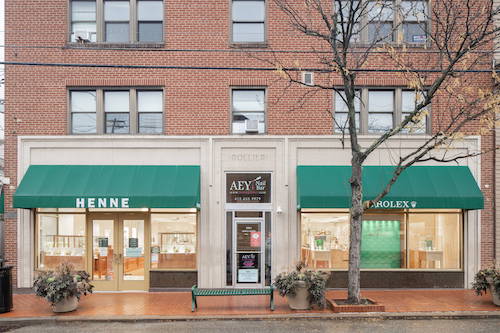 Exterior, above, and interior of Henne Jewelers, Pittsburgh, PA.