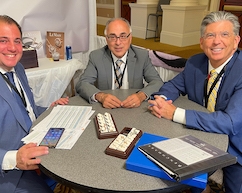 The CBG show typically leads up to the JCK Show in June, but when JCK announced it would move its traditional June show to August this year, CBG owners Joe Murphy and Andie Weinman had to decide if another virtual show made sense or if they should go ahead with an in-person event that wasn’t connected to JCK, as CBG was unable to secure dates to line up with the JCK Show as it normally does.

With extensive safety precautions in place—and space for only half of the organization’s suppliers due to social distancing protocol—Murphy and Weinman called every CBG retailer to see if they could secure commitments from 50% to attend. With only half the group’s suppliers attending, the owners wanted a 1:1 buyer/supplier ratio at the show. Many retailers were on board, preferring the June timing for their initial fall buying. As it turned out, CBG was the first convention held at Caesars Palace since the pandemic and, as an added bonus, Covid restrictions in Las Vegas were lifted June 1, the first day of the show.

Morning meeting at the recently-concluded CBG Show at Caesars Palace, Las Vegas. It was the group's first in-person event in more than a year.

“The energy was off the charts! The showroom floor was always busy. The retailers were all there to do business and reconnect with their CBG supplier partners,” said Weinman.

Also for the first time in CBG history, she and Murphy invited qualifying retail guests to visit the show. Out of 12 guests, seven committed to join the buying group on site.

“A lot of the time people in the better end of success in this industry are not always so open to sharing, but this has not been the case this week! We have been welcomed with open arms. Many retailers in the group have been so friendly, inviting us to sit down and talk business. It’s been great getting advice and hearing stories from such a wide variety of stores, retailers, and manufacturers,” said Jeff Nacol Turnbo of Nacol’s Jewelry, Wichita Falls, TX.

“It has been so much fun—the buying has been a frenzy. The vendors were happy, the jewelers were happy and we got to see our friends we hadn’t seen in almost two years, added member retailer Mark Callis of Bischel Jewelry, Sedalia, MO. It has just been a blast!”

CBG was the second industry event to relaunch this spring. The first, of course, was The Centurion Show, held May 23-25 which was a stellar success and saw universally happy retailers and exhibitors. Related: Centurion 2021 Report: Happy Retailers and Exhibitors; Brisk Buying

This fall, CBG will host its first CBG Retreat at the JW Marriott in Tampa, FL, October 4-6, 2021. The retreat will incorporate a trade show experience along with education and interactive tools for everyone to reconnect and reunite. For more information, contact Estelle Hedaya, (305) 868-9004.