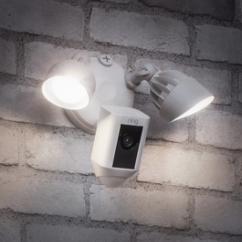 Ellington, CT—Authorities are looking for suspects wanted in connection with an overnight home invasion of a retail jeweler in Connecticut. Image: Ring.com

State Police say troopers had responded to a home in the town of Ellington just before 4 a.m. September 4 after receiving a call from the occupants, according to a report on WFSB-TV3.

A bulletin from the Jewelers Security Alliance says three male suspects in black clothing forced their way into the home of a couple who own a jewelry store, which Connecticut state police say is located in Wethersfield. The suspects pointed a gun, tied the couple up, and demanded money. The jewelers turned over about $100,000 worth of jewelry and $45,000 in cash, says a report in the Hartford Courant.

Neither of the couple were injured, says WFSB. Police rang the bell of a neighbor with security cameras, asking for their doorbell footage.

"We got so scared, because we were sleeping when they rang the bell. We got so scared like 'What happened?', and we just checked with the neighbor like, 'What is going on here?'," neighbor Swata Shah told the TV station. She and her husband, as well as other neighbors questioned, said the neighborhood is very safe but now they’re going to take more precautions.

JSA offers the following recommendations for retail jewelers and others in the jewelry industry:

1. It is a risk for jewelers to keep large quantities of jewelry and cash in the home.

2. Appropriate locks, alarms (including an audible alarm), lighting and cameras (including outdoor cameras and doorbell cameras) at the home can offer a measure of protection.

3. A dog can also offer some measure of protection.

4. Keep your car keys by the bedside table, and when a suspicious circumstance occurs, hit the panic alarm to attempt to scare away any criminals.