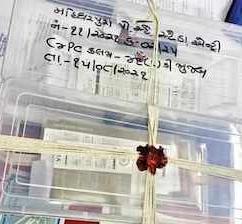 Carlsbad, CA—GIA (Gemological Institute of America) has released a statement about a series of fraudulent diamond grading reports in Surat, India. The reports sought to pass off treated or lab-grown diamonds as natural and untreated. Police seized 24 fake GIA diamond reports, claiming that lab-grown and treated stones were natural and untreated. Image, Times of India

In mid-August, as reported in the Indian media, police in Surat uncovered a fraudulent scheme involving counterfeit inscriptions linking lower-quality diamonds to GIA diamond grading reports for higher-quality stones. In the investigation, police seized several diamonds and what appeared to be 24 GIA diamond grading reports and detained a diamond trader named Dharmesh Patel. Police also seized a laser inscribing machine that Patel allegedly used to inscribe numbers corresponding with GIA numbers on the stones, says the Times of India.

The police requested assistance from GIA India Laboratory Pvt. Ltd. (GIA India) in determining the characteristics of the seized diamonds and reports. GIA India determined that some of the reports were legitimate GIA reports and some were counterfeits using legitimate GIA report numbers. GIA India also determined that of the diamonds presented with reports stating they were natural, untreated diamonds, most were treated or laboratory-grown.

“GIA India is continuing to cooperate with local authorities. In addition, GIA India requested the police conduct the necessary investigations and take the necessary steps to identify and arrest the perpetrators of these malicious acts against GIA and the innocent people who this fraud may have deceived,” says the statement.

“This unfortunate situation reinforces why it is important, especially in any transaction where the buyer does not have a trusted relationship with the seller, to have the diamond grading report updated by GIA before completing a purchase,” says the GIA statement.