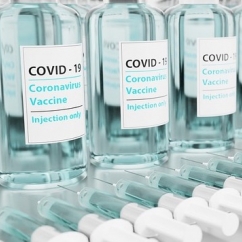 Merrick, NY—President Biden’s announcement that businesses with more than 100 employees must require vaccinations against COVID-19 was met with both positive and negative reaction in the business community. Image: thorstensimon via Pixabay.

The proposed rules, which require workers to get the jab or face weekly testing, will impact some 80 million American workers, says this report in The New York Times. The requirements will be imposed by the Department of Labor and its Occupational Safety and Health Administration.

On the positive side, the mandate, which impacts roughly two-thirds of U.S. workers, has been welcomed by business organizations such as the U.S. Chamber of Commerce, the Business Roundtable, and the Culinary Workers Union in Nevada. It also gives cover to businesses that either already have instituted a vaccine requirement—such as Tyson Foods, Disney, AstraZeneca, JPMorgan Chase, and United Airlines—or that want to but are afraid of legal challenges.

Their fears aren’t unfounded. An article in Inc. magazine outlines three risks companies might face after imposing a vaccine mandate: vaccinated employees harassing unvaccinated colleagues, employee turnover, and the unlikely but still possible event of an employee having a severe adverse reaction to the jab.

An ABC News article published in May said "Federal law also says employees have a right to reasonable accommodation if they can't get the vaccine due to medical concerns or religious objections, and EEOC (Equal Opportunity Employment Commission) reminds employees they are legally protected from harassment such as anti-Asian bias or if they feel they are not being allowed to work because they are high risk from COVID-19."

Small businesses with fewer than 100 employees are not required to follow the mandate, but experts advise they write their own policies to ensure clear communication and set workplace expectations around vaccinations, says Business Insider.

Can a company require its employees to be vaccinated as a condition of employment? Yes, they can, says the U.S. Chamber of Commerce. The Chamber also says that asking for proof of vaccination is not a violation of HIPAA health privacy laws. And there is historical precedent for vaccine mandates, as this ABC News report explains.

It also is legal to terminate an at-will employee who refuses to get vaccinated. “However, it's crucial that it's made clear that that mandate is a condition of employment prior to termination, or else there may be confusion or push back from employees who feel unrightfully terminated,” says the Inc. article, which also notes that a mandate might drive some employees to quit or deter new hires.

The Inc. article also says issues between vaccinated and non-vaccinated employees should be handled the same way as any other workplace strife: privately. Do not reveal any medical information about the individual who isn’t vaccinated.

And, finally, says Inc., if an employee does suffer a severe adverse reaction, they might be entitled to workers’ compensation benefits.

OSHA has the authority to quickly issue a rule, known as an emergency temporary standard, if it can show that workers are exposed to a grave danger and that the rule is necessary to address that danger, says The New York Times. The regulation is likely to be challenged in court, either by individual companies or states, says the Times, but Steve Bell, a partner at the law firm Dorsey & Whitney who specializes in labor and employment, and is quoted in the article, says the Department of Labor is in a fairly strong position to justify the mandate.

“They’ve got a broad pretty solid basis for saying: ‘We’re here to protect the workers, and this is part of our purview, and we think that this is something that will protect employees,’” he told the Times.