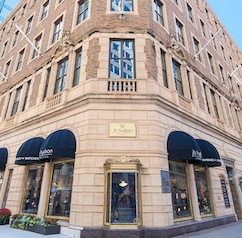 Minneapolis, MN—It’s the end of an era: famed jeweler JB Hudson is leaving downtown Minneapolis. The retailer, now owned by Iowa-based Gunderson’s, will close the doors of its iconic flagship store (image) at the end of the year. It has already begun a moving-out sale at the location, and the doors close for good December 31.

JB Hudson, one of the industry’s oldest and most venerable names, has had a presence in downtown Minneapolis since 1885, although it has had several locations there over its 136-year tenure. Founded in 1885 by Josiah B. Hudson, it has passed through multiple owners, including the Dayton Co. (now Target Corp.), Montreal-based luxury jeweler Henry Birks and Sons, Minneapolis agriculture magnate James R. Cargill, the billionaire Pohlad family, owners of the Minnesota Twins baseball team and, finally, Iowa-based Gunderson’s Jewelers, which bought the venerable retailer from the Pohlads earlier this year.

Although Gunderson’s chief executive Brian Gunderson told the Minneapolis Star Tribune in March that he had no immediate plans to change the JB Hudson name or to move the store from its downtown location, the area has been challenged recently and Gunderson acknowledged at the time that those plans could change. Indeed, Breanne Demers, president of Gunderson's, told the Minneapolis/St. Paul Business Journal that declining foot traffic downtown played a role in the decision to close the store. The area emptied of office workers during the pandemic and a Star-Tribune article noted that JB Hudson is not the only business to have been negatively impacted. The lack of a robust 9-to-6 workforce downtown has been very hard on retailers and restaurants in the area.

Although the flagship JB Hudson is going away in its present incarnation, it’ll be reborn under the Gunderson’s brand next winter. The Business Journal says both staff and remaining inventory will move to a newly built Gunderson’s store that’s slated to open in Wayzata, MN by February [2022]. And the JB Hudson name isn’t going away entirely—the retailer still has a counter inside boutique MartinPatrick 3 in the city’s North Loop neighborhood and Demers told the Star Tribune the company is scouting for another location to launch a rebrand of the name, possibly downtown, and could make an announcement by mid- to late 2022.

Next article:
COVID Vaccine Mandates: Requirements And Risks For Employers Of All Sizes