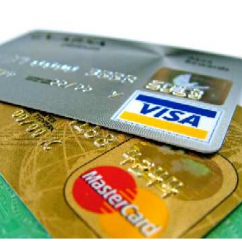 Merrick, NY--In a just completed, first-ever survey of credit-card use and processing in the luxury jewelry industry, The Centurion found that most high-end jewelers are fairly satisfied with their service providers, despite often being hit with higher transaction rates for non-qualified or special-category transactions, as defined by the processor or credit card company.

To assess the pulse of this important aspect of the market, The Centurion conducted a statistical spot-check of high-end retailers and manufacturers earlier this month to gauge the financial impact of credit card transaction fees on their bottom line. Close to half of all respondents (45.9%) process more than $50,000 in credit-card transactions each month, and another 40.5% process between $15,000 and $50,000.

Among popular consumer credit cards, Visa is the most widely accepted by luxury jewelers. 98.4% of Centurion respondents accept it, 96.9% accept Mastercard, 92.2% accept American Express, and 73.4% accept Discover. Relatively few accept either Diners Club (23.4%) or JCB (4.7%). Finally, 18.8% offer their own in-house credit. (Respondents were asked to check all that apply, so totals exceed 100%).

Among popular credit cards used most by consumers, Visa again topped the list, followed by MasterCard, then American Express Platinum, American Express Green, and American Express Black. Discover and other cards were about equal but ranked less popular. As an aside note, an estimated 64% of small businesses—those with 1-50 employees—used a business credit card as a means of financing in 2009, according to Creditcards.com.

Please click the chart below to download a PDF loaded with Charts and Stats that will help you compare your company with those of the respondents':

Here are some other key findings from our survey:

In terms of card-processing providers they use, respondents named more than 30 different companies. Many of these were local banks or other locally-based financial service companies, but some respondents did name larger providers. The most-often cited of these was First National Merchant Solutions. Heartland, TD Bank, and Costco Merchant Services also were cited by multiple respondents.

In terms of fees charged by credit card companies, our respondents said American Express charges higher fees overall than either Visa or Mastercard. Amex's average fee per transaction among all respondents is 2.98%, though individual responses varied from a low of 1.83% to a high of 5%.

Why do transaction fee percentages vary? Regina Leadem, vice president of sales for GE Money, says a lot of stipulations go into determining a fee. The rates quoted to a merchant generally only apply to qualified transactions (those in which the card is present at the time of transaction), while non-qualified transactions (such as telephone or online sales where the card is not physically present) are charged higher fees.  So are transactions made on a "rewards card," i.e. one where the cardholder accrues points toward travel, merchandise, or other perks.

There's not much a merchant can do about that, says Leadem. Just know that if you see a rewards card, such as an airline- or retailer-branded Mastercard or Visa or an American Express Rewards-branded card, you're going to be paying a higher transaction fee for that sale.

Another place additional fees can sneak up on a merchant is when a Visa or Mastercard debit card that's tied to a checking account is run as a credit card. Even though it's not revolving credit, it still costs merchants more per transaction--which is why so many always ask first if the customer wants to run the card as a debit or credit card, she says.

What can a business do to lower their transaction fees? First, simply ask what you can do, suggests Leadem. But the reality is that most small businesses aren't going to get the best rates that are reserved for high-volume companies, so the best option is to partner with a credit-card consolidator or consultant, who can negotiate volume rates. Many business associations and buying groups--including Jewelers of America and others in the jewelry industry--have partnered with companies such as one called Tru, to help their members get the best possible rates.

Finally, credit card issues are not limited to retailers alone. Many suppliers also accept credit cards from their retail customers for payment, and they're also subject to the same fees and chargebacks--and potentially at a higher level because their average transaction is higher.