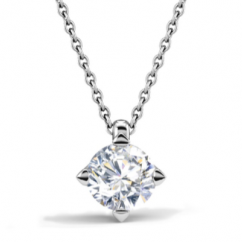 London, UK—While it’s no secret that diamonds and fine jewelry benefited greatly from consumers’ inability to travel during the pandemic, De Beers’ latest Insight Report reinforced earlier research showing consumers are seeking items of lasting value and significance. While some consumers did feel guilt about buying luxury while many others suffered during the pandemic, they assuaged that guilt by making purchases they consider stores of value likely to appreciate over time.

“Fine jewelry took on a sharpened relevance in the pandemic context, leading to a surge in purchases of high-ticket classics, such as engagement ring and solitaire stud upgrades and investment-grade watches, particularly the iconic models from leading brands such as Rolex,” says the report.

Caryl Capeci, CEO of Chow Tai Fook North America, reflected on the Hearts on Fire and Memoire brands’ positive holiday sales: “In times of uncertainty or a crisis like 2020, consumers often lean to those items that represent security, safety and value. Better quality, classically designed diamond jewelry fits this need perfectly--especially when connecting with those we love the most. Both Hearts on Fire and Memoire retail partners experienced this firsthand last year.”

Charles Stanley, president of Forevermark US, saw similar consumer buying patterns. Observing an uptick in one-carat-plus Forevermark diamond sales this holiday season, he noted, “One carat plus diamond rings and diamond ear studs were the stand-out pieces that sold especially well versus prior year, as did all classic diamond jewelry. This clearly proves that the enduring value of diamonds resonated strongly with consumers, reflecting their desire to give gifts of meaning and lasting value this past holiday season.”

The report also noted that in the broader luxury retail market, while trend-driven luxury brands struggled in 2020, the brands that are perennial classics—such as Hermès—had an exceptionally good year.

As the pandemic (hopefully) draws to a close, consumers are ready to shop again. In a March 2021 survey conducted by De Beers, 43% of U.S. consumers said they were more likely to make a significant purchase in 2021 than they were last year. The March survey also confirmed the mindset of the majority of Americans remains firmly rooted in quality over quantity: 88% of respondents now believe it is better to invest in fewer but better things than trendy items that may not last.

Natural vs. lab-grown. The Insight Report addressed a separate study of U.S. consumer attitudes toward lab-grown diamonds. In mid-December, De Beers fielded a study of 5,000 affluent consumer respondents for its bi-annual LGD tracker via 360 Market Reach. Although almost half (47%) of respondents said they don’t consider LGD's to be “real” diamonds (although technically they are), they do consider them a fun modern purchase they’re open to making—but it has a very distinct place in their minds as fun and fashionable, not an investment that will retain value over time. Seven out of 10 respondents indicated they would not pay more than $1,000 for a lab-grown diamond. 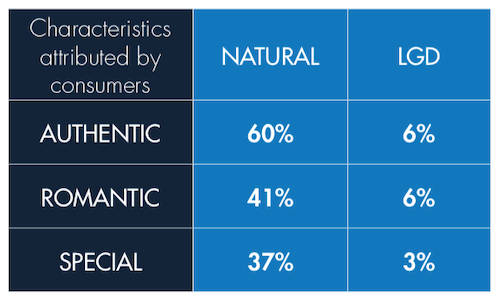 These are the attributes De Beers says consumers attribute to natural vs. lab-grown diamonds.

The report showed wholesale prices of lab-grown diamonds declining, and says that validates consumer concerns about their long-term value—and potentially risks consumer trust in their jeweler. The fix? Transparency and keeping prices down. Steve Coe, CEO of De Beers’ own Lightbox brand of lab-grown diamonds, says the declining prices prove Lightbox’s strategy of transparent pricing at $800 per carat was the right move.

“We have always sold our LGDs at a fair and transparent price, derived from a reasonable commercial margin above the actual production cost, rather than hitching it to what a natural diamond’s value might be. Recent LGD price falls simply indicate that we are today where others will be tomorrow. Around or below $1,000. Exactly where the consumer wants us to be.”