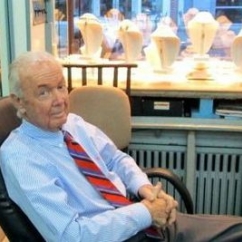 Marlton, NJ—Robert Wolf, a longtime fixture on Philadelphia’s Jewelers Row, died March 15 following a bout of pneumonia. He was 91. Image: Robert Wolf, courtesy of Wolf family via the Philadelphia Inquirer.

Born March 6, 1930 and raised in Philadelphia, Wolf and his cousin Stan opened Wolf Jewelers in 1961, at Eighth and Sansom Streets, aka “Jewelers Row.” He quickly became known among both customers and fellow jewelers as the “go-to guy” in the Jewelers Row neighborhood, says this tribute in the Philadelphia Inquirer.

Wolf worked with his cousin at the store before buying him out in the 1970s. Other family members also were active in the business: Wolf’s father, Jack, came to work in the store after retiring from the Philadelphia police force; his wife Erma worked there as did their son Lonnie and daughter Alissa.

Wolf had somewhat of a celebrity clientele in his heyday, says the Inquirer. Some of those included the late entertainers Sammy Davis Jr., Eddie Fisher, and daredevil Evel Knievel, as well as some local Philadelphia celebrities.

In addition to Erma, his wife of 69 years, Wolf is survived by his son and daughter, a granddaughter, sister, and other relatives.