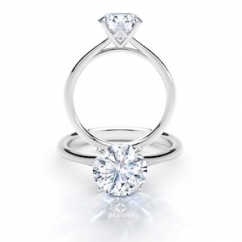 New York, NY—The key findings of De Beers’ 2019 Diamond Insight Report reflect the changing nature of romantic relationships in modern society and how it will impact the jewelry industry. As reported in last week’s edition of The Centurion Newsletter, love is universal and timeless, and the connection between love and diamonds is both well-established and remains intact. But from there, everything else is a new ballgame as changes in societal norms are re-shaping the diamond sector. To wit, De Beers no longer refers to the “bridal” category; instead, it is now referring to the category encompassing engagement and wedding rings as “Commitment Diamonds.” Left: A Forevermark Icon setting engagement ring in platinum.

Much of the 2019 results build upon the findings of the 2018 study, which also focused on the decline in bridal and rise of other diamond gifting as some of the shifts in modern diamond consumption habits reflect how society is changing in general.

As both the 2018 and 2019 Diamond Insight Studies show, traditional marriage is evolving globally from a cultural imperative to more of an optional choice. With that, diamond jewelry consumption patterns also are shifting, as are the occasions for which consumers are more and less likely to buy diamond jewelry.

This week, we delve deeper into the bridal jewelry—or, rather, commitment diamond—shifts and examine key changes and how they impact prestige jewelers.

“Throughout history, people across the globe have exhibited an inherent need to mark the most important moments and emotions with something innately precious,” says De Beers. There’s evidence that diamond rings were used for betrothal among European nobility as far back as the Middle Ages, and of course we know about the diamond betrothal ring presented by Maximilian of Austria to Mary of Burgundy in 1477. Today, diamonds are still viewed as symbolizing a celebration of love and commitment, regardless of what form that relationship takes. In the United States, just under half (48%) of all diamond jewelry gifting is a love-related gift. 24% by value of total U.S. women’s diamond jewelry sales are for commitment occasions, whether engagement or a gift occasion after marriage.

“The expanded notion of couple relationships among all ages is reflected in the way love gifting of diamonds has evolved,” says De Beers. “This presents an important area for the diamond industry to develop its offering and meet consumer desires for diamonds as gifts of love beyond the traditional rites of passage.”

Coming into the mix are broader societal values, with responsible, ethical and “earthy” preferences helping to shape consumers’ diamond choices. And with an increasingly wide range of relationships being celebrated, great opportunity exists in diamond personalization, or allowing consumers to create their own designs.

An important change in terminology. Perhaps one of the most important aspects of the 2019 Diamond Insight Report is the one that could easily slip by almost unnoticed if one weren't reading carefully: that the former “bridal” category is now being called Commitment Diamonds.

The new Commitment Diamonds category includes diamond engagement rings and diamond wedding bands for women—what had traditionally always been called “bridal” jewelry—but today it encompasses much more beyond that. Marriage, rather than being viewed as a symbol of new beginnings, is now a more rational decision made along a journey that’s already well underway, says De Beers. Decisions like buying a house together or having a child are bigger than the proposal, and couples that do decide to get married typically have already shared enough experiences together, both good and bad, that “tested the waters” so that they can reasonably expect the relationship to last. In fact, De Beers’ research shows that a discussion or decision to have children is often the trigger for getting married.

De Beers’ research shows that these couples might choose a diamond engagement ring because of tradition or societal expectation, but once they do it takes on a special emotional meaning for their personal experience.

Today, however, more than 1/3 of all couples (37%) will not get married for more than a year after their engagement, typically waiting about 18 months, says the research.

Another 34% will schedule the wedding six to 12 months after the engagement, meaning almost ¾ of all couples will wait a minimum of six months to get married, and fewer than 30% will marry within a few months of engagement. 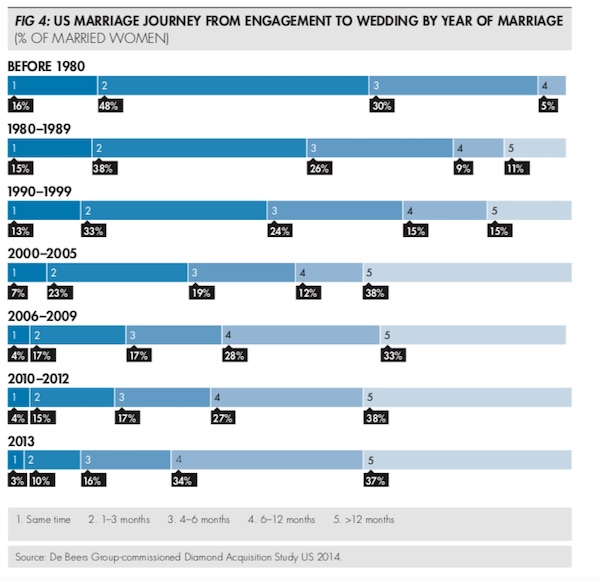 Lower cost. Across the board, couples are spending less on an engagement ring now than they did six years ago. In 2013, the average spend for a diamond engagement ring was $3,700; it declined to $3,400 in 2017 and remains there today.

It’s important to note, however, that De Beers’ average is across all categories. More affluent couples still typically spend more and buy bigger stones. Engagement ring spend also varies by region, according to The Knot’s 2019 Engagement Study of 8,882 nationwide respondents. The Knot—which does tend to skew to a more affluent audience—says the national average spend for an engagement ring is $5,900, but found wide regional variances:

83% of shoppers in The Knot’s research chose a diamond engagement ring; the remainder chose other gemstones. About 50% of respondents’ engagement rings were between one and two carats; 50% featured round diamonds, and 25% were in a halo setting. White gold remained the most popular metal, with slightly more than half (54%) choosing it, but interestingly, the second-most popular choice was rose gold, with 14% choosing that. De Beers’ study, meanwhile, did not include rose gold; there, the choices were: white gold (46%), silver (19%), yellow gold (15%) and platinum (11%). 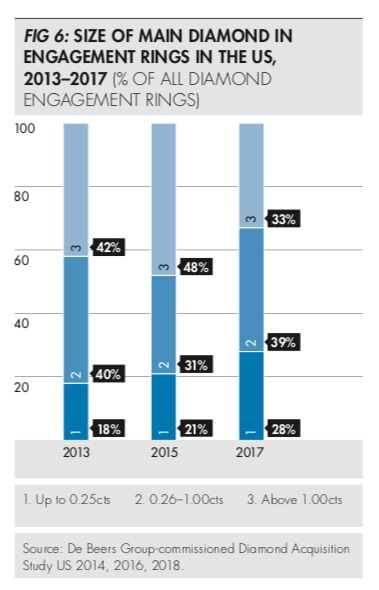 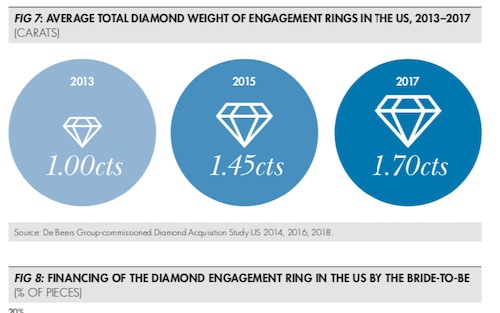 De Beers also found a very interesting trend: the bride kicking in money or, in some cases, just paying for her own ring. And when she does, she typically spends more than the groom! The proportion of engagement rings paid for entirely by the bride doubled from 7% in 2013 to 14% in 2017; and in 2017 brides who reported financing the ring themselves spent an average of $4,400, while grooms spent an average of $3,300. 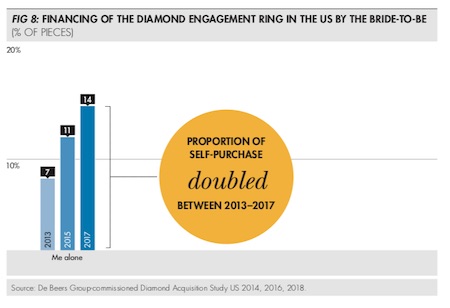 While The Knot says halo settings accounted for 25% of their respondents’ choices, De Beers says the trend is still much stronger than that: 38% of its respondents reported choosing a halo setting. Pure solitaires, by contrast, now represent only 16% of all U.S. engagement ring sales. 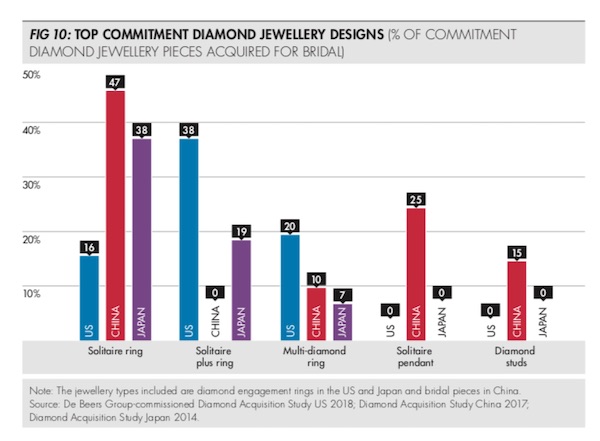 To the great relief of jewelers, The Knot’s research found that most couples still prefer an in-person experience when it comes to commitment-formerly-bridal jewelry. 70% of respondents reported going to a brick-and-mortar store to buy their rings. 40% of those shoppers opted for a local independent retailer and 30% went to a national or regional chain—of which the top three choices all were Sterling stores: Kay was most popular, followed by Zales and then Jared.

De Beers’ research backs this up. While it found a noticeable jump in online purchasing between 2013 and 2017, from 17% to 22%. That said, however, 78% of couples still purchased in a brick-and-mortar store—and even the online purchasers tended to buy from retailer websites, vs. pure-play e-commerce. But there, the big winners were “masstige” brands like Tiffany and Gucci or mass department stores, both of which grew their share of market relative to independent jewelers’ e-commerce sites, big-box, or pure-play e-tailers. 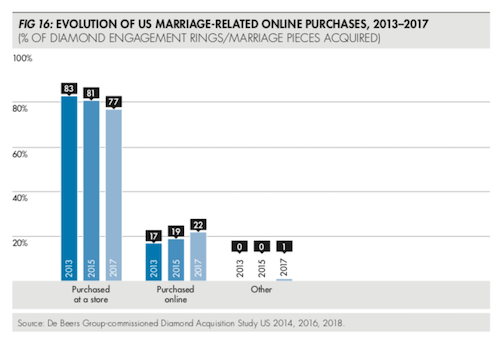 Brands get bigger. Branded jewelry is gaining popularity for commitment occasions. In the United States, international luxury and designer brands grew their share of the U.S. diamond engagement ring market from 29% of value in 2015 to 41% in 2017. Unbranded pieces accounted for 37% (units) of engagement rings acquired in 2017. By share of value, that figure drops to 31%.

“Brands are successful in the commitment segment when they approach the market with a deep understanding of Millennials’ attitudes to true love and the changing nature of committed relationships,” says De Beers, highlighting Forevermark’s 2019 ‘I Take You, Until Forever’ campaign and the Tiffany True engagement ring.

All charts, De Beers. Next week: The newest opportunities for growth