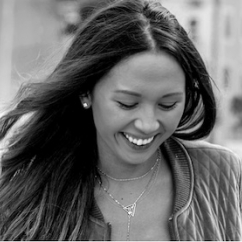 New York, NY—Love is universal and timeless, and the connection between love and diamonds well-established. But from there, everything else is a new ballgame. De Beers’ 2019 Diamond Insight Report examines how the evolving nature of romantic relationships is re-shaping the diamond sector, and delves into how some of the shifts in modern diamond consumption habits reflect how society is changing in general. Many of the findings of this year's study build upon the findings of the 2018 study, which also focused on the decline in bridal and rise of other diamond gifting.

Globally, traditional marriage has evolved from a cultural imperative to more of an optional choice, but the good news is that the decline of marriage hasn't put diamonds on a fast-track to irrelevance. What it has done, however, is shifted the categories of diamond jewelry consumers are buying and the occasions for which they're buying them.

“It’s vital for the diamond industry to understand the implications of, and opportunities that arise from, evolving social norms and traditions,” says De Beers. “Encouragingly, diamonds appear to hold the same relevance for couples, whichever way they choose to celebrate their commitment.”

As marriage declines and cohabitation rises in the United States, the nature of diamond jewelry gifting also is changing. Cohabiting women still receive diamond jewelry gifts from their partners, but those gifts are more likely to be earrings or necklaces/pendants, while engagement rings remain de rigueur for cohabiting couples that intend to marry. The annual research report also included same-sex couples for the first time.

In total, estimates De Beers, diamond “love gifting,” for any purpose, accounts for 52% of the market. It's still the majority of all diamond jewelry sold, but it's a much smaller majority than it was even a decade ago.

The numbers. Total global growth of diamond jewelry sales rose 2.4% last year. Growth rates were almost equal in the United States and China, but the U.S. is by far still the world’s largest market for diamond jewelry, accounting for nearly half (49%) of all global sales. That’s up a full percentage point from 2017, at 48%. U.S. diamond jewelry sales rose 4.5% year-on-year, and China rose 4.7%, but the U.S. market accounts for about $36 billion in sales, vs. China’s 10 billion.

Looking ahead, De Beers sees the fundamentals underlying the diamond market to remain strong. The biggest threat at present is the U.S.-China trade war and currency fluctuations. Longer term, the biggest growth potential will come from the rising middle class in both India and China.

Despite rapid growth in China, the United States is by far the largest diamond market in the world, accounting for just below half of all global diamond sales.

Mid- and upstream. Midstream diamond traders started 2018 on an optimistic note following a strong 2017—especially with higher prices on one-carat polished goods—but that was short-lived. The midstream sector experienced new challenges with tightening liquidity, the depreciation of the Indian rupee against the US dollar, and a build-up of surplus smaller polished diamonds. The absence of strong demand from retailers who are keeping inventories tight didn’t help, either.

De Beers’ report is cautious for the sector going forward: retailers continue to operate with very lean inventory, demanding more value-added services and products from their suppliers, while cash flow continues to be constrained and credit tight. But present pain should eventually give way to future gain, suggests the report, as the market becomes “more efficient and healthy” (which could be understood to mean it shakes out).

Global production volume decreased by an estimated 4.3 million carats, mainly due to lower outputs by ALROSA and Rio Tinto, but the average value of carats produced increased, due mainly to Rio Tinto’s lower output.

Rio Tinto’s Argyle mine, expected to close in 2020, produces both its famous rare fancy pinks and the small, low-end commercial goods for the mass market. Its closure will take up to 14 million carats out of the market. Prices for Argyle Pinks are rising, but the low-end goods are what are most vulnerable to competition from synthetics.

Related: Shocking Pink: Argyle Stones Should Rocket In Value After Mine Closes

Love and not marriage. Romantic love continues to be the main driver of diamond jewelry gifting—as mentioned above, it accounts for slightly over half of all diamond jewelry sales. This includes all expressions of romantic love, whether traditional marriage or cohabitation, heterosexual or same-sex relationships. 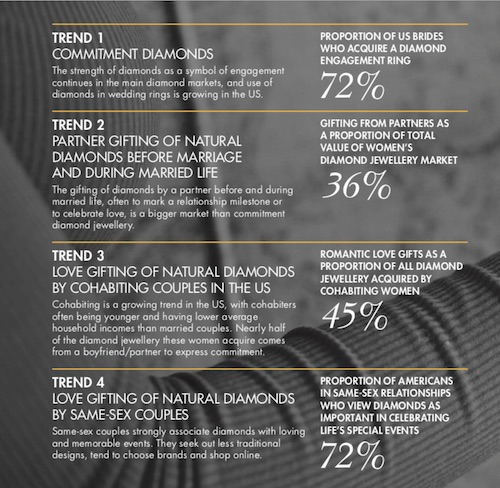 As earlier research has shown, couples today celebrate their commitment through many kinds of moments, not just traditional rites of passage. “Forever” doesn’t happen like in fairy tales; couples recognize that it’s a journey with daily commitment to both the mundane and the challenging moments of being together.

Some key metrics from the 2019 Diamond Insight Report:

Next week: A deeper look into each category and what it means for prestige jewelers.