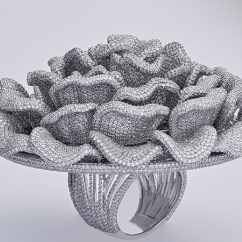 London, United Kingdom--SWA Diamonds, an India-based designer, has set a new record in the Guinness Book of World Records by creating a mushroom-inspired ring featuring 24,679 diamonds.

The announcement notes that SWA Diamonds has named the ring "Ami," which is Sanskrit for immortality, adding that the piece was created to draw attention to the brand.

It took three months to complete the ring. The computer-aided-design (CAD) was 3D printed. The team then poured gold into the 3D-printed mold before placing each natural diamond piece by hand on the base of the 41 unique mushroom petals.

The ring is valued at $95,243 and weighs about three-quarters of a pound.

Previous article:
This $1.73 Million Swiss Watch Is Now the World’s Thinnest at 1.80mm

Next article:
Plumb Club to Present Fraud and Mitigating Risk Seminar on Wednesday