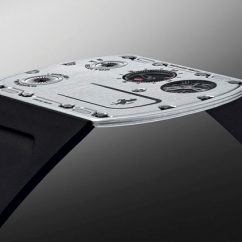 A report states that the watch has a profile of 1.80mm, which is 0.05mm less than the previous record holder, Bulgari's Octo Finissimo Ultra — about the thickness of human hair.

The report adds that the Richard Mille RM UP-01 Ferrari Ultra-Thin results from 6,000 hours of R&D and laboratory testing and is a collaboration with watchmakers Audemars Piguet Le Locle and car makers Ferrari.

Richard Mille will present this watch as a limited edition. Only 150 watches are said to be produced, each carrying a price tag of $1.73 million.

"RM UP-01 Ferrari constitutes a triumph of technical prowess and exemplifies a new approach to watch mechanics in which technicity more than ever dictates aesthetics," the company said, as per the report.