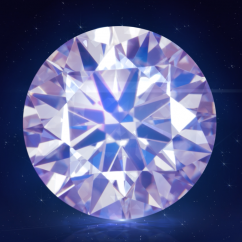 “As the largest [diamond] mining company in the world, Alrosa takes its role as a leader very seriously, knowing that we can add value to the diamond supply chain through promoting new diamond categories and concepts from mine to market, bringing retailers new business opportunities, and consumers new diamond stories that keep them engaged with the natural diamond segment.
“For now, we are focused first and foremost on health and safety and reminding customers that we are there for them,” says Rebecca Foerster, president of Alrosa USA. But moving forward, the company will be launching a new product and marketing campaign in October, offering jewelers an opportunity to bring back business with a special category of diamonds that give off a soft glow.

‘Luminous Diamonds’ will be a brand of products made using fluorescent diamonds that have blue tints and emit a soft blue glow under ultraviolet (UV) light. Until recently, this trait sometimes was considered a negative, but ALROSA plans to alter that perception with a positive "Diamonds Under Pressure/Greatness is Made Under Pressure" campaign that uses female influencers to showcase the products and encourage women to "follow their inner light."
The campaign, tapping into the global movement for female empowerment, will reveal what makes everyday women unique, including what defines them and what makes people look up to them and want to be in their presence. It will highlight these women, their journeys, and the products themselves, while also encouraging consumers to look within themselves, so that they can connect with their own inner light.
“With all that is going on in the world right now, this campaign is more relevant than ever. We all know that diamonds are made under pressure, but women are too. Our diamonds will serve to remind women of all they can accomplish with their unique and rare, natural features—their special hidden glow,” says Foerster.
ALROSA introduced the new collection concept through a session at the recent virtual AGS Conclave and is working closely with AGS Laboratories.

“We look forward to sharing more with you as this project progresses, including what the concept will mean for your business and its customers,” says Foerster.

Mumbai, India—Arun R. Mehta, one of the founders of Rosy Blue and a pillar of the diamond community, has died. He was 80.

Mehta, a member of one of India’s largest diamond families, launched a cutting and polishing business in 1960 in what was then called Bombay. The company, B. Arunkumar & Co., became a De Beers sightholder in 1969 and, after changing its name to Rosy Blue Group in 2000, grew to be one of the industry’s largest global companies with offices in more than a dozen countries around the world. The company remains both a De Beers sightholder and a client of Russian diamond miner Alrosa. 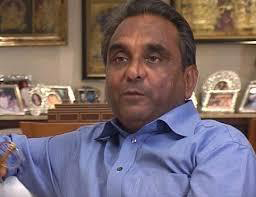 Mehta was extremely active in the greater diamond industry. He was a founding member of the Bharat Diamond Bourse, serving as a director and its chair. He also was active with the Bombay/Mumbai Diamond Merchants Association and the Gem & Jewellery Export Promotion Council in India. He was praised throughout the Indian diamond community for his ethics, humility, philanthropy, generosity, and wise counsel. Diamond businesses in both Mumbai and Surat, a major cutting center, were closed June 16 in his honor.

Mehta is survived by his wife, Rajanika, a son and two daughters and their spouses, plus brothers Dilip and Harshad and numerous grandchildren and great-grandchildren.