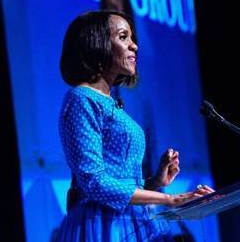 If there was one key point to bring home from the 2019 Las Vegas jewelry shows, this was it. Sustainability and social and environmental responsibility were discussed repeatedly at multiple seminars and events throughout the week, with an emphasis on how jewelers can use these themes to tell stories that resonate with consumers and make them feel good about the diamonds and jewelry they buy. In particular, the focus was on natural diamond purveyors grabbing back the narrative from the lab-grown diamond sector, which has seized upon eco-friendly and socially responsible as key selling points.

At Forevermark’s annual partner breakfast in Las Vegas, the brand’s leaders emphasized sustainability as a core principle in its marketing efforts. In attendance at the Thursday morning breakfast were His Excellency Mokgweetsi Eric Masisi, president of the nation of Botswana, and First Lady Mrs. Neo Jane Masisi (top left), along with other key dignitaries of the government of Botswana. De Beers Group CEO Bruce Cleaver introduced Botswana’s first lady, who spoke to the audience about the journey from a small African nation to standing in front of an audience of American jewelers in Las Vegas.

“Her perspective on the diamond industry and the good that diamonds do is important,” said Cleaver, emphasizing that the industry is much bigger than anyone realizes. “It’s good for you to hear these stories and bring them back to your businesses and tell your customers.”

“Diamonds are a part of my personal story,” said Masisi. As a high school girl in Botswana, the career she wanted to pursue would require a college education her parents couldn’t afford to provide.

“In school, I learned of the Debswana scholarships. Young people, professional and accomplished, were attached to the company and passionate about it. I wanted to join this company one day. True to my wishes I got a Debswana scholarship for accounting, and true to my dream I ended up working at the company.” (Debswana, a partnership between De Beers and the government of Botswana, is that nation’s largest employer.)

Before diamonds were discovered in 1969, Botswana was one of poorest countries in the world. Today its citizens have free healthcare, free education, and a generous social safety net, thanks to diamonds, said Masisi.

“Having access to free schooling and a strong development pathway for the future is something many people around the world don’t take for granted. The diamond economy is used for development and as a result many people are able to grow their talents and opportunities. I got my first job with no interview. Where in world do you get that? You complete your studies and there is a desk, chair, and computer waiting for you. You learn skills and values to grow a career, with values, integrity, honesty, professionalism, and high productive hours. I learned a deep appreciation of the role diamonds play in Botswana.”

Many of her contemporaries—particularly engineers, accountants, and IT specialists—went on from jobs at Debswana to careers with leading companies around the world, she said, and in time she did as well. She first left to work for a company that manufactures major mining machines, and later went to other positions around the world, ultimately ending up in New York City working at the United Nations.

“When Eric and I were married in 2002, we saw, and still see, a future of endless possibilities. I look at my [diamond] wedding ring as a reminder of those, a symbol of progress as much as love and commitment. Diamonds are finite but they leave behind a legacy like no other. Whenever I reflect on the product, I can’t think of anything that has had such a transformative impact on myself, my people, and my nation.”

“I always think a personal story is so much more memorable than a few facts, but hopefully you’ve all had chance to see the DPA report “Total Clarity,” which gives a factual basis to the story of the good diamonds do.” Among those points:

“Go onto the [Total Clarity] site, dig into it, find those facts most compelling for you and your sales force. Our story is such a strong one!” 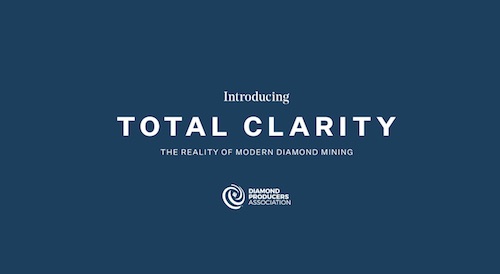 Charles Stanley, president of Forevermark US, reminded retailers that most Forevermark branded diamonds originate in Botswana at one of the five De Beers/Debswana mines there.

In the United States, Forevermark has taken steps to reduce and offset its carbon footprint already. “I’m proud to say in the US, we are carbon neutral!” said Stanley.

That evening, the Diamond Empowerment Fund’s annual Diamonds Do Good Awards gala honored a group of America’s most successful retail jewelers, the members of the Luxury Jewelers Resource Group, as well as Russian diamond miner ALROSA, for community, environmental, and social impact programs.

The gala is held every year on the Thursday evening prior to the JCK Show opening. Funds raised by the event are used to provide higher-education scholarships and assistance to young people living in countries where diamonds are mined or where the diamond industry does business, and to help communicate this ‘Diamonds Do Good’ impact to consumers.

Botswana Top Achiever student and recent Stanford University graduate, Moratwa Chamme, represented D.E.F’s Student Scholars. “This [scholarship] is not just college tuition. To my country, Botswana, it is an investment in its human capital and evidence of the positive impact of diamonds.”

In addition to the governmental delegation from Botswana, the Honorable Bob McLeod, premier (i.e. governor) of the Northwest Territories of Canada was in attendance.

Upon accepting the Diamonds Do Good award ALROSA’s efforts at bringing about social impact change, CEO Sergey Ivanov said, “We set ourselves an ambitious task, to make ALROSA’s regions of operation develop together with the company by providing employees a good wage, safe working conditions, modern infrastructure and strong social development programs which have been key priority of the company since diamonds were first found in Yakutia in 1954.”

The Luxury Jewelers Resouce Group was awarded the Diamonds do Good Community Building Award for their efforts at fostering positive social programs in the neighborhoods in which their stores are located. LJRG member Michael Pollak, CEO of Hyde Park Jewelers, accepted the award on behalf of the group. “I believe this award will inspire other jewelers to [continue to] elevate their business practices to serve their clients and communities in an ethical and transparent manner. When we can foster this spirit among our peers, this represents a win for the entire industry.”

D.E.F. president Anna Martin, also senior vice president of GIA, closed the evening by saying “the recipients of this year’s Diamonds Do Good Awards truly reflect the ongoing positive impact being fostered by the diamond industry around the world. Sharing these stories with our consumers is not only good for business, it is a responsibility for the entire industry.”

The following morning, ALROSA invited members of the media to a special demonstration of its Diamond Passport, an innovative new program for diamond tracing—which includes a special video storytelling element showing everything about the journey of each individual diamond.

To reach a consumer’s pocket, diamonds have a long journey from the mine through processing, sorting, dealers, cutting, setting into jewelry, and selling to the consumer, said ALROSA’s Evgeny Agureyev. ALROSA’s cutters work only on the company’s own rough, cutting in Moscow and other Russian towns, eliminating the middle channels. This guarantees non-conflict, plus the ethical conduct, human rights, equality, and labor practices, along with social and environmental responsibility.

“A diamond’s traceability is a statement of confidence in both authenticity and ethical sourcing,” said Agureyev. Under the new program, every diamond will have an electronic passport, containing not only standard information about the diamond’s physical characteristics, but also additional information about its age, place and the date of its extraction, as well as the time and place of its cutting, and the exact cutter’s name and background. Currently, ALROSA is testing the system with 2,000 diamonds; this number will soon increase.

Each diamond also will have a unique video passport visually illustrating the vital history (above) of its extraction and production. The video passport is created automatically by downloading data from appropriate databases, said Agureyev. (Specifics for each diamond are added to a standard base video.) The full-version video can be divided into a few parts and is fully shareable and accessible from any kind of device.

“It’s a format appreciated by Millennials and older generations too,” she said. While the diamonds and their accompanying digital personalized content will be offered to dealers now, soon B2C clients (i.e. jewelers) will also have access to this information via www.diamonds.alrosa.ru.

Watch the video here or click on the image below. 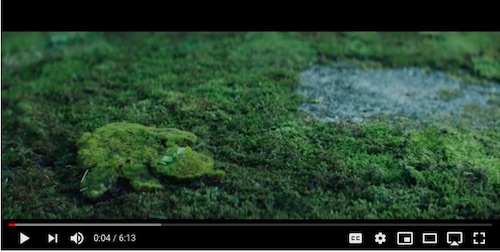 Next week: How retailers can benefit from sustainability and more.