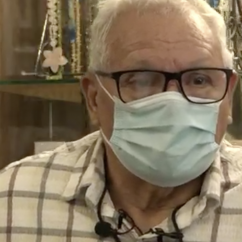 Stockton, CA--Guillermo Garcia, 74, had most of his valuable possessions taken away during a nighttime robbery.

According to a report on local news station, ABC10, the robbery occurred on January 25 outside Garcia's home. Garcia, a certified jeweler for more than 30 years, took home his most valuable merchandise that evening.

The suspect — an armed robber — walked up to the jeweler who had his car parked on the street. The home security video footage shows the suspect pointing a gun and taking away a plastic container. Garcia tells in the interview that he decided to go after the robber but was knocked unconscious when he was hit in the face with the robber's gun.

"I have nightmares. Sometimes I can't sleep, and it's a real bad feeling," Garcia said in the interview.

In the interview, Garcia's wife and store manager, Betty Andrade-Garcia, said that the suspects had been stalking them and knew their routine.

Garcia-Andrade hopes that the suspects get caught. "I was raised to be a fighter, and I'm going to fight all the way," Garcia-Andrade said, as per the ABC report.

Those with any information about the suspects can anonymously call Stockton Crime Stoppers at 209-946-0600. Any tips leading to an arrest could result in a $10,000 reward.

Previous article:
Jewelry Store Owner and Her Dog Ward off Thief in Break-in