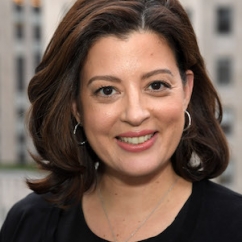 Scottsdale, AZ—At a special session during Centurion Scottsdale 2019, Sarah Gorvitz, senior vice president of communications and insights for the Diamond Producers Association, outlined both the updated mission of the DPA—reflecting developments in the lab-grown sector—and unveiled some of the marketing on tap for this year. The DPA’s enhanced mission is three-fold:

Related: Free Webinar! How You Can Use DPA’s Marketing Muscle To Sell More Diamonds In 2019

DPA, De Beers’ and other research shows that diamonds form the ultimate status symbol, represent ritualistic giving, and are forever, said Gorvitz. But these next-gen consumers are less focused on traditional rituals and symbols, so DPA is seeking to expand those perceptions and speak directly to their generational values.

“The way to facilitate a relationship change with diamonds is through a perception shift,” she explained. The “Real Is Rare, Real Is A Diamond,” points to diamonds as billion-year old treasures of the earth and the ultimate symbol of sincerity, something that will resonate with younger consumers.

“The message in the Real Is Rare campaign is about authenticity, and young people want that message,” she emphasized. 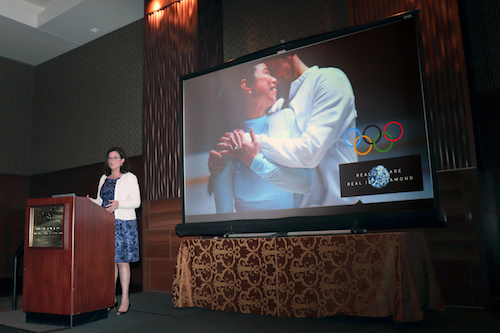 The 'Real Is Rare' message got tremendous exposure during the 2018 Winter Olympics, above, and the Royal Wedding, below. 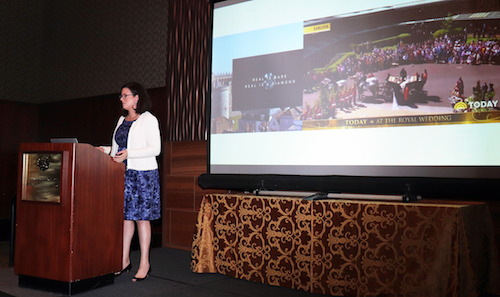 In addition to the core assets mentioned above, DPA created custom content with various media partners, such as NBC Universal, three custom commercials that ran across the Olympics on TV and online and, of course, the wedding of Prince Harry to Meghan Markle, which Gorvitz called a “dream diamond moment.” Priyanka Chopra’s wedding to Nick Jonas provided additional opportunities for the diamond message, as did Gwyneth Paltrow’s wedding to Brad Falchuk, when DPA helped industry partners sell jewelry on the website of Paltrow’s GOOP brand.

Custom vehicles in print included Town & Country and O, The Oprah Magazine, where a four-page custom piece about diamonds ran front-of-book in both publications—most notably in Oprah’s famous “Favorite Things” issue in December. It was the first time the two Hearst publications ever collaborated on a piece of content, which also included an online video, said Gorvitz.

Also important is the Real Is a Diamond Instagram channel, which DPA uses to educate and drive positive diamond conversations. Meanwhile, on Spotify, conversation popped up around the music used in DPA spots, which led DPA to have whole pieces of music created around the spots, and push it out to the people who wanted to know more about it.

Other key findings about diamond messaging are that the word “natural” conveys emotion, whereas “mined” doesn’t. Natural means rare, scarce, difficult to find, and finite, and very expensive to make into jewelry. It’s real emotional value that takes on symbolic meaning in the wearer’s lives, Gorvitz said, and that value increases over time.

What else resonates with consumers is ways that diamonds help make the world a better place, both through economic opportunity in diamond countries and environmental protection initiatives, which all combine to create a symbol of authenticity and preciousness.

“We’re an industry that does a lot of good in a lot of the world. We support more than 10 million people around the world,” says Gorvitz.

Related: Inaugural ‘Diamonds Do Good Video’ Gets 11 Million Millennial Impressions In One Month

Addressing lab-grown. No diamond conversation today is complete without addressing the rise of lab-grown stones. As the industry grapples with the two products, DPA naturally is refining its message:

This last point is key, says Gorvitz. “The natural diamond industry supports 10 million people globally, while a one-carat CVD diamond takes up to 40% more energy to produce than a natural diamond of same size.”

Despite implications that growing diamonds is better than mining them, only a few growers can claim they’re using only renewable energy. The rest—especially growers in Asia where a significant percentage of the stones come from—are using electricity generated by fossil fuels.

DPA’s messaging, while geared to consumers to address the differences in a factual way, also works for the trade also. A key part of DPA’s mission is to have trade support materials available for free. These will include, among other initiatives, shareable content emails three times a month, a special trade portal on the DPA site, and a three-module e-learning course. Centurion will host a special free webinar about these assets on Friday, February 15. Register here.

Priorities for 2019: 2018 was about introducing DPA to the industry and getting up and running, said Gorvitz. Priorities for 2019 are making “Real is Rare” more explicit, and linking it to naturalness. It will include:

“We’re maintaining our investment in 2019, focusing ahead of Q4,” said Gorvitz. “It’s important you know our [marketing] assets are not just for DPA, they’re for the whole retail community, and for sharing. No matter what you’re selling in your store, you can use it. We’re not shooting specific pieces of jewelry, we’re making it about natural diamond and carrying the emotion through.” 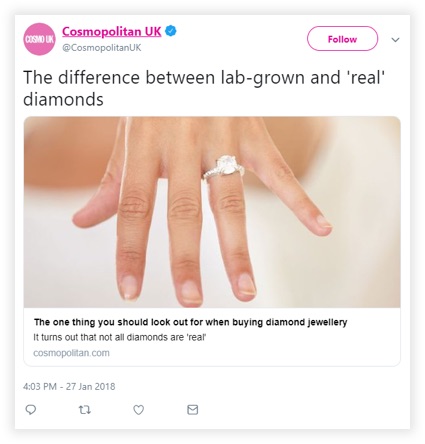 Next: What DPA is doing for the female self-purchase market

Previous article:
Free Webinar! How You Can Use DPA’s Marketing Muscle To Sell More Diamonds In 2019