Merrick, NY—No, this isn’t an episode of The Big Bang Theory.

Guess who said that and what they’re talking about? If you guessed diamonds or anyone in the jewelry industry, you’d be wrong.

This is a direct quote from the October issue of Consumer Reports, in an article about the new generation of meatless burgers. The article reads remarkably like a discussion of mined vs. lab-grown diamonds, except for a much bigger “ick” factor that we’ll get to later.

Not your basic veggie burgers, the newest crop of meatless burgers are designed to look, feel, and taste like beef. “Plant-based protein” is apparently the hot trend in food engineering (??) and this new generation of patties are made from an assortment of things that many of us, myself included, probably would rather not know.

Mung beans? Just the name alone sounds gross. Maybe it was a regional slang where I grew up, but mung to me always meant icky, slimy, and generally to be avoided. Things with mung on them were left outside or thrown straight into the washing machine. Saying you felt “mungy” meant you were way overdue for a shower and a toothbrush.

To be fair, the plant-based burgers aren’t bad. My husband and I have been subscribing to Blue Apron for a few years, and one of our recent deliveries contained a Beyond Burger dinner. The recipe called for making them with caramelized red onions, sharp cheddar, and garlic/caper aioli on a toasted potato roll.

Cooking the patties up required a lot more olive oil than I normally would use to make a burger. The finished result, therefore, was much greasier compared to beef, but they tasted ok. My husband liked them a lot, which surprised me as he’s a classic meat-and-potatoes guy (although to be fair, he eats sashimi and I don’t.) I thought they were inoffensive and relatively tasteless, but nothing I would go out of my way to eat again. 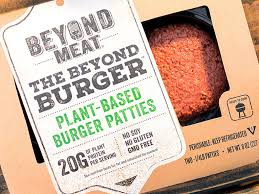 Although a bit greasier than beef, these weren't bad, but the level of food-processing required to make "healthy" burgers is a bit ironic.

Then I read the Consumer Reports article. Glad I read it a few days after our dinner, because even now my stomach is turning a bit. Less so from the plant-based burgers with the off-putting ingredient list that I hadn’t seen earlier, but because the food scientists are working on making synthetic beef.

Yes, you heard that right. From Consumer Reports: “Also on the horizon—but not yet on the menu—are lab-grown meats and fish. These are foods made by taking cells from animals and multiplying them into fleshy, edible muscle tissue in a bioreactor rather than raising animals on farms to slaughter.”

Getting back to the Big Bang Theory, how I wish this were just a bizarre episode of fiction. I can hear the dialog between the characters now: Sheldon would be equal parts fascinated and horrified by the idea of synthetic beef, as his inner scientist does battle with his inner Texan.

I can see Leonard being curious, Penny joking about getting drunk and going petri dish tipping, Howard making some crack about his mother’s cooking, and Raj, who generally rejects Indian culture, insisting he would rather eat real beef.

I don’t know why the idea of lab-created beef turns my stomach. I have no problem with properly disclosed lab-grown gems, but I’m not planning to eat them. I have no objection to plant-based protein, even when it’s got a gross name. But somehow the idea of eating live flesh grown in a bioreactor is just a little too 1984/Frankenstein/I-hate-to-think-where-this-can-lead, not to mention just plain nauseating.

Maybe it’s because my mom always cooked everything fresh. Her career was in food, first as a commercial buyer and later as a caterer. We ate local and seasonal long before it was trendy, and apart from some good deli and lots of Jello salads, my mom never served processed food.

My dad, meanwhile, was a polymer research chemist who had in fact once made diamonds in his lab in the late 1950s. But what my dad did and what my mom did were not easily confused, especially at the dinner table.

While we’re likely years away from any legal debate about lab-grown vs. cultured meat, maybe the beef industry can take some pointers from the jewelry industry. Meanwhile, if someone is planning to serve me a cultured beef burger, I really hope it just came from a cow that likes opera.