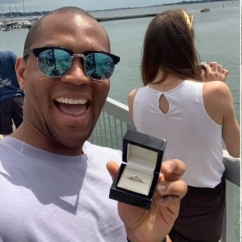 Welwyn Garden City, UK—Mustering up the courage to propose is nerve-wracking enough, but when you’re a guy who’s famous for improvising everything on the spur of the moment, finding that right moment is even more challenging because your girlfriend is going to get mighty suspicious if you suddenly start making plans for a fancy dinner, a trip, or any of the usual lead-ups to a proposal.

Then he got daring. He started slipping the ring into social media photos—some of which also included his girlfriend, Cally Read. All in all, he snuck the ring into 20 photos and two videos, figuring that if she caught on, that obviously would be the right moment to pop the question.

It took about a month, and some of the photos were daring indeed—including one where he dropped the ring into her palm while she slept, and a selfie where almost got caught as he held the ring just above a pair of binoculars she was looking through at a scenic observation point. 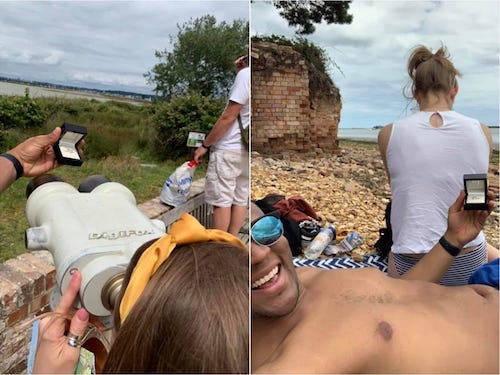 Above and below: Groom Edi Okoro slipped his fiance's engagement ring into about 20 photos and a couple of videos prior to popping the question. Cally Read, his fiance, doesn't see it through the binoculars or behind her back.

“You want to propose in a way that speaks to you as a person and a couple,” he said on Facebook. The couple, who met doing various athletic competitions, have been together more than five years. The sneaky-ring story naturally went viral, with global media picking it up and fans from around the world now following the British couple on the new Facebook blog page they’ve created. Click here and here for more. 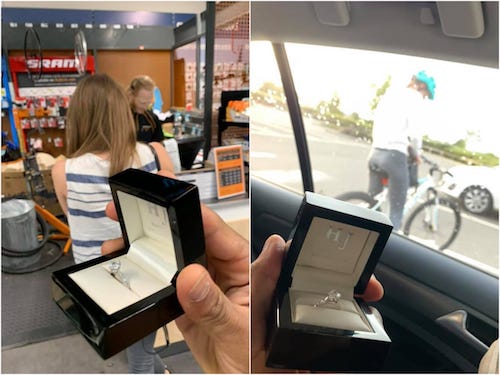