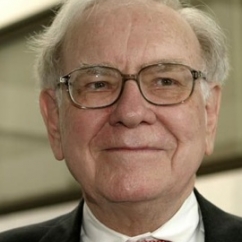 Omaha, NE—For years, Warren Buffett has famously declined to invest in gold or other commodities, on the basis that they don’t generate income. He’s said things like “it has no utility,” called it “a cube that doesn’t do anything,” pointed out that an ounce of gold now will still be an ounce at the end of eternity, and even once observed that if Martians came to earth, they’d scratch their heads over how humans venerate the shiny metal.

So when the Oracle of Omaha suddenly decided to invest in a gold mining company just as prices for the metal are soaring, you’d better believe Wall Street sat up and took notice. Buffett also sold off some of his bank shares, dumping almost all his stake in Goldman Sachs, about 61% of his stake in JP Morgan Chase, and about one-fourth of his Wells Fargo holdings. He’s trimmed his holdings in other banks and in credit card companies Visa and Mastercard as well.

Some pundits wonder if the move to dump financial stocks means Buffett is betting against the American economy and turning to gold as a safe haven investment. The metal broke the $2000 barrier in early August, reaching a high of $2060, dropped back to about $1,935, and began climbing again from there. At press time it was about $2008.

But let’s unpack this and take a closer look: first off, Buffett kept his holdings in Bank of America. This suggests he’s not against banks, he’s just responding to developments at certain banks. And he didn’t buy gold futures or bullion. He bought shares in a mining company called Barrick Gold, one of the world’s top producers of the metal. That's actually quite in line with his usual philosophy.

Buffett has often talked about why he thinks owning shares of quality companies makes more sense than owning gold. He’s also renowned for buying companies whose management philosophy he likes. One might therefore assume that Barrick is doing something right. Its stock price soared nearly 12% on the news of Buffett’s interest. Shares in rival miners Newmont, AngloGold Ashanti, and Yamana all rose sharply as well.

Some analysts speculate that despite the stock market’s almost full rebound after March’s freefall, there’s more economic pain to come, especially if the coronavirus pandemic has a second wave, and Buffett is merely repositioning his portfolio to be ready. In addition to dumping financial stocks, Buffett also unloaded airline stocks recently.

But jewelry industry watchers know that Buffett is no stranger to gold. He’s been involved with it for years through his retail, manufacturing, and refining acquisitions in the jewelry industry. Although his investment is just 1.2% of Barrick shares, could this be the initial step of creating a fully integrated vertical mine-to-market jewelry supply chain for his holdings? After all, jewelry has been surviving the downturn better than many other categories, and its emotional value keeps customers coming back even in down times.

Previous article:
What’s Next For The Jewelry And Watch Supply Chain?