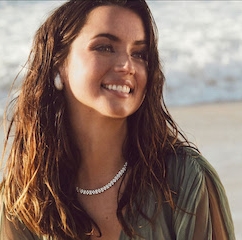 New York, NY—Following the September 8 debut of its 2021 fall generic diamond advertising campaign, the Natural Diamond Council has released a list of some of its advertising placement plans. The majority of those outlets are aimed at a predominantly female audience.

The ads, of course, feature Golden Globe-nominated actress Ana de Armas (image) and a theme tying diamonds ‘For Moments Like No Other’.

Earned media features such as InStyle’s exclusive interview with de Armas will be complemented by a robust media plan targeting 21-45 year olds.  The campaign will be surrounding primetime broadcast hits such as Good Morning America, The Bachelorette, Real Housewives and E! News, among others. For example, it was shown during an episode of HGTV’s popular hit Hometown on September 13.

Display media key partners include WeTransfer, The New York Times’ “Modern Love” column, and online publications from Bustle to Conde Nast Traveler. There will be strong non-linear video placement in Hulu, VEVO, YouTube, Amazon Fire and more. The campaign will be reinforced with billboard units in prime locations including Soho in New York City and Sunset Boulevard in Los Angeles, and will also be featured across all NDC social media channels.

NDC Official Retail Partners will have exclusive access to campaign assets for both co-op and in-store opportunities. The NDC also is now offering global retailers and manufacturers of diamond jewelry the opportunity to produce the same collection featured in the ads, without copyright limitations for the holiday season.