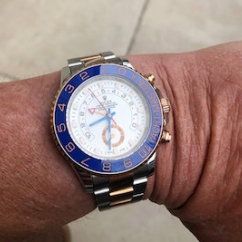 Southern England—If you’re a gentleman of a certain age and income bracket and planning to go golfing in England, you might want to leave the Rolex at home. (Image: Victim Alan Bruce had his £14,000 gold Rolex stolen by the pair. Picture: Alan Bruce/BNPS)

A pair of women posing as charity workers are believed to have stolen expensive Rolex watches right off the arms of about 14 older men from May through late July. The Daily Mail reports the two thieves are believed to be Eastern European, and typically approach lone older men in the parking lots of exclusive golf clubs or in shopping areas in town centers throughout the south of England. The pair have struck in areas near Bournemouth, Southampton, Portsmouth, and more.

The women, in their 20s or early 30s, carry clipboards and ask their victims to sign a petition, then either surreptitiously get his watch off without him realizing it—or simply rip it off and sometimes bruise or injure the victim in the process.

Alan Bruce, a marine engineer who at 63 is somewhat younger than the other victims, told the paper the two clearly were experienced professional thieves. They approached him to sign a petition for a center for the deaf, and as he did so, one of the women hugged him. Immediately suspicious, he clamped a hand down on his wallet, but didn’t think about his watch. By the time he realized it was gone, the pair had driven away.

Next article:
Only In Europe: Well-Dressed Luxury Jewel Thief Escapes On Scooter