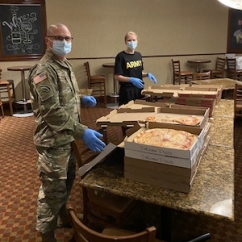 Scarsdale, NY—In early March, the town of New Rochelle in Westchester County suddenly became New York’s first hotspot for COVID-19. A local attorney who, like many others in the affluent communities of Westchester, regularly rode the Metro North train into New York City, was diagnosed with the illness—but not before coming in contact with thousands of other commuters. He also had been out and about in the community, attending religious services and other events.

Mike and Matt Wilson, owners of Wilson & Son Jewelers in neighboring Scarsdale, knew immediately that things were going to be very different for a time. Their sister, Amy Wilson Soravilla, is a nurse on the front lines of the battle against COVID-19, and they had a lot of early feedback about what was happening.

What they heard was frightening. The brothers sprang into action immediately.

“As a retailer, we had to find other places to apply our energy because we can’t be open,” said Mike Wilson in a phone interview with The Centurion. “We’ve always been a philanthropic business, like other retailers in the jewelry business, and we wanted to let our clients know we’re not just sitting around waiting for you to buy.”

As part of his normal philanthropic activities, Mike Wilson is on the board of Feeding Westchester. He saw firsthand how much food insecurity there is, even in an affluent area like Westchester County.

“Last March, Feeding Westchester distributed about 800,000 pounds of food. This March, it was 1.7 million pounds. Demand went through the roof. People who would never have to go out and find a meal [at a food bank] have to now,” he said. Demand rocketed to the point that the National Guard is working with the organization to pack food quicker and get it out sooner.

Still, the Wilson brothers wanted to do more, especially after hearing Amy’s harrowing accounts of hospital life on the front lines of COVID-19.

“She’s doing everything from applauding when patients get off ventilators and go home, to wrapping dead bodies. It’s just on another level. It’s way more important than what we do. She helped us understand even more the nurses and doctors watching this go on.” 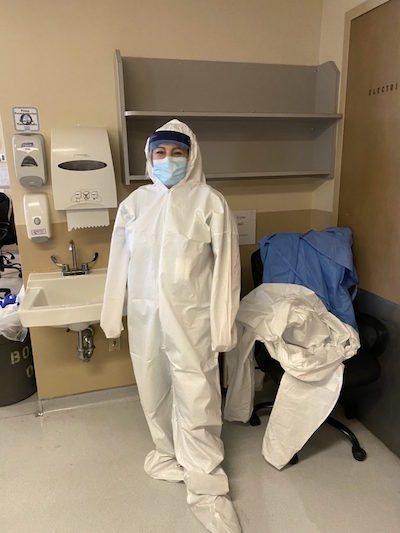 Not being medical professionals, Mike and Matt couldn’t do much to relieve the healthcare workers’ burden—but they could provide meals, and that’s what they immediately decided to do. Through Mike’s connections with Feeding Westchester, the store began regularly feeding workers at three area hospitals and recently provided dinner for more than 100 National Guard troops at a hotel in Tarrytown, NY. Follow the brothers’ efforts on the Wilson & Son blog here. 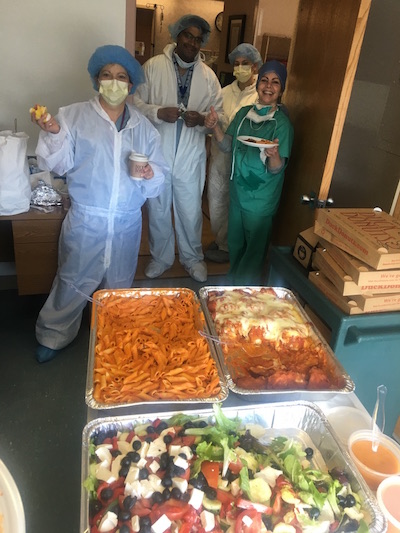 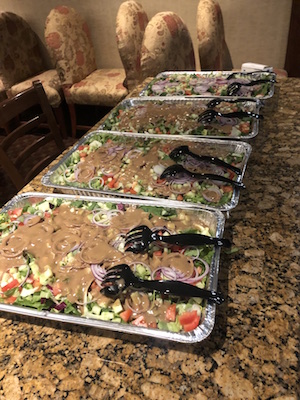 The Wilson siblings only recently lost their father, Ira, in February (unrelated to COVID-19).

“When Dad died in February, we saw how dedicated nurses are then. We would bring donuts or something, but this is another whole playing field now!”

The brothers have gotten letters of appreciation, which Mike says wasn’t their motivation. “Our motivation was to say thank you, so here’s trays of food.” They’d love to hand out cocktails—and the nurses would probably appreciate them—but obviously they can’t, he joked wryly.

Wilson is gratified to see their efforts have snowballed; a good snowball in the face of such a bad one like the virus.

“When we first started doing it, we were on the early side. They’d say, ‘send us lunch tomorrow.’ We now have to schedule donations to come in, so many people are doing it! They have 14 days’ worth of people that want to treat them.”

Albeit in the midst of such a terrible pandemic, that’s “a really good problem to have,” he said.

This past weekend, the brothers fed about 100 National Guard troops helping on the front lines in Westchester.

The Wilsons teamed up with Pizza & Brew in Hartsdale, NY, to provide pizza and salad at the Doubletree Hotel in nearby Tarrytown, NY, where the troops are staying. They chatted with the troops and had a chance to observe inspiring leadership in action.

“The commanders fed the team. We witnessed it. They were standing behind the line feeding the troops, and it was quite inspiring. Really elevated doing the right thing to another height.” Later, Wilson received a LinkedIn message from the commander of the entire National Guard brigade. He wasn’t at the event, but he personally reached out through LinkedIn to thank the Wilsons.

Cautiously optimistic. Back at the store, which is closed until the stay-home orders are lifted, the Wilson brothers are hard at work. The brothers go into the store for a few hours a day (with appropriate distancing from each other) to handle some business—which is still going on, says Mike. They’ve also kept paying their staff, though they’re not involved with the food efforts.

“I think we’ll see an uptick but I don’t think it’s going to be huge. People are going to still celebrate. People do want to mark occasions. It’s happening a little, through emails, our website, we’ve done curbside pickup, FedEx. We’ve done just enough to feel comfortable that when this all changes we’re going to be fine.”

But he is worried about other merchants. “I think the people on our end are going to be fine. Those people are going to be proactive and help the community, finding ways to do business. But I look around the village and wonder who’s going to reopen. Who has the wherewithal to withstand this? My oldest daughter lives in Manhattan, close to where the [military hospital ship] Comfort is docked. She’s terrified to go out in the streets!

“I drove in to make a delivery to client. It was like the police closed the roads for me. I went down FDR, across 96th, down York and I was the only one on the road. It took me 22 minutes,” he said. The trip normally would take well over an hour.

Mike also wonders if he’s had a closer brush with the virus than just hearing Amy’s stories. Early in the pandemic, his wife didn’t feel well and got tested. Her test got botched somehow and she never got her results, he said, but she went through all the symptoms of COVID—thankfully mild—and is fully recovered. Mike had to quarantine for 14 days as well.

And back in February, just as his father had passed, he himself was feeling under the weather. It was before the New Rochelle outbreak, so he was tested for both strep and flu but not COVID. His results came back positive for the flu—but he still wonders if he might have had a mild case of COVID-19.

In the meantime, he and Matt will continue to do the best they can to help feed their community and local health care workers.

“People around here won’t be kept down. It’s incredible,” he said.

Next article:
Centurion Helps Hometown Hospitals With Donation Of Elastic